Not So Shocking 'Shock of the News'

As purposefully noted here, the latest enticing show at Washington's National Gallery of Art is a gem - not only because of its play on words and the fine representation on museum walls of a dying tradition. Recall the playful slogan of yesterday, "What's black and white and read all over?" - the old phrase linked to, of course, the habit of reading ( holding in one's two hands a folded bundle) a newspaper. The exhibit is a take-off and send-up as well as a sentimental recollection of a time when newspapers mattered.  "Just chimney soot on chopped up trees" is the adage posted above artists' interpretations, or, rather, "manifestations" of the newspaper phenomenon from 1909 to 2009, in curatorial words on the flyleaf of the handsome  book accompanying the show. 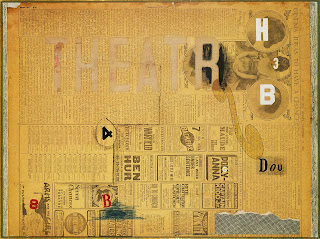 The phrase Shock of the New is attributed to the late culture critic Robert Hughes from his 1980 BBC TV series. A timely note: Mr. Hughes only died recently. A pity he couldn't witness this witty assemblage of work on view through January 27. For more, see http://www.nga.gov. You might even weep with joy at the familiar form now in the process of being consigned to history. An extra touch (literally) : Visitors can take away a sheet of paper that is actually a work of art by Felix Gonzalez-Torres. You might find the  quoted text printed on the front and back of each sheet less shocking than beguiling.
Posted by Urbanities at 10:06 AM