Washington is known as the city of trees, though no official body seems to agree on the actual numbers in what is called our tree canopy and whether the city's urban forest is growing or declining. Coming home from a lecture about Thoreau and trees at the U.S. Botanic Garden (he liked trees more than he did people),  I was especially aware of the varied specimens bordering my walk uphill past the Capitol. I witnessed a veritable memory garden of botanical and political history. Like human fingerprints, none was alike in size or shape. Except that most of them carried unusual identity tags:  little brass plaques.
These are  commemorative trees planted to honor past Congress folk or a cause such as the
young linden tree dedicated to "the revolutionary spirit of New England."  Speaker of the House Nancy Pelosi has her name under an American elm dedicated to 'the Greening of the Capitol Initiative" in 2008 (whatever that was). Farther along, on grounds of the Library of Congress' stately Thomas Jefferson Building, former Librarian James Billington  contributed an acer, a Japanese maple, "in honor of the  Congressional Research Service's Centennial" in 1914. Even a former head of the library's Hebraic division has a tree in his name.
On and on they went, until some sort of boundary was reached at Second Street SE. By focusing on such an aesthetic abundance around me, I was able for a short time to forget the inanities taking place inside the great building they surround. May the beauty created in this landscape have some calming effect on what transpires there.  One thing for sure: most of these trees will outlast the people inside. 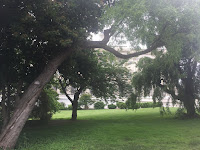 Posted by Urbanities at 10:34 AM No comments:

Easy enough to write about a  return to the olde homestead and feel good about what you find. But the daily grind of life these days doesn't often give us much to cheer about - at least in the political sphere. For diversion and delight, as well as stimulation and education, fortunately there are  pleasures aplenty to be found in the arts if you know where to look. Art in its many forms, unfortunately, doesn't often come to you.  It takes a certain amount of proactivity (a word?).  Just today (June 7/18) I stumbled upon a charming invention - a museum of sorts dedicated to the history of D.C. Alleys, backed by local government sources. It was a small storefront tucked away in a downtown alley (of course). What a lark, I thought - a tribute to human whimsy and inventiveness.
On a much larger scale consider a current show in Manhattan's Museum of Modern Art celebrating the work of an African-born artist with the intriguing name of Bodys Isek Kingelez. The title is 'City Dreams" - a startling original fantasy creation of some 50  colorful structures  mainly vertical in scale. Urban density of a kind that exists nowhere else on earth. Take time to look him up on the web before the exhibit moves on. "Visual joy...sustaining life force," notes New York Times' reviewer Roberta Smith (June 1/18). Here is just a taste, thanks to her report. 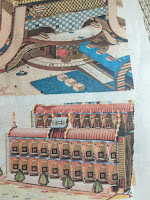 Posted by Urbanities at 11:54 AM No comments:

You can't go home again goes the old saw, courtesy of writer Thomas Wolfe. Well it seems that you can if you can stand to hear the words 'new' and 'hot'.  I went back to Lancaster, Pa., one recent June day, forewarned about  changes - outwardly anyway -  to this traditionally hidebound conservative town now being called  in some quarters 'the new Brooklyn.' A friend had sent along a copy of a rave restaurant review from the New York Times in which the writer  cooed about a new Italian place created from a former warehouse for Amish and Mennonite general stores on a downtown street. The reviewer said he or she would liked to have licked the plate of all the wood fired artichokes and smoked paprika aioli....
If anybody knows Lancaster, and its county, by reputation they know this is home to generations of socially reticent  farmers garbed in 'quaint' costumes who practice the so-called simple life. 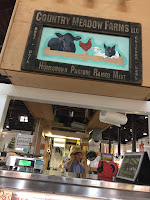 They are highly unlikely to be promoting foodie cult destinations.  Shrewd merchants that they are,  they aren't  likely investors in the famously fickle restaurant business that lately seems to have taken over a town I knew as a teenager. Back then I considered spaghetti and pizza to be fine dining and steak at the local stockyards a treat.
The cattle are gone, the acreage grassed over, but the Stockyards restaurant remains in new form. So do the cows. 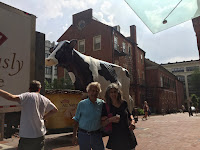 My visit coincided with  a conservation-minded event called Lancaster Water Week, during which on this First Friday evening civic  hullaballoo, the Turkey Hill diary thought to celebrate by bringing in an outsized model bovine to the town square and handing out free popsicles opposite a flashy wine bar called Shot & Bottle in a location that previously was a bank. Not an ordinary wine bar. This one offers only wine made in Pennsylvania. Nearby, not far from fabled Central Market (yes, some real farmers inside) were at least four or five other 'hot spots' attracting crowds of drinkers and diners carrying on into the night. Among them a 'real' French restaurant named after its owner, with a 'Bakery Ouvert du.' The clerks were wearing protective gloves when handling the pastry. A bit of pretention with prices to match.
I learned all about  Japanese whiskey available in Carr's, another owner-named restaurant. Admirably, too,  efforts of the  Marriott hotel  chain to preserve in its spotlit foundation depths open to viewers what is purported to be part of the pre-Civil War underground railroad that allowed Southern slaves to escape north. High overhead was a bar atop the sleek modern structure  awash in light and noise. Evening revelers surged through surrounding streets, past facades of immutable classic red brick and white trim..
I remember when it was daring to stay downtown later than 10 p.m.
You can go home again. Bring money. Be hungry.
Posted by Urbanities at 6:49 PM 3 comments: