A House In Chania

Chania is the largest town in western Crete and the island's former capital, a village more than a city. We were  seven women visitors, ages 50 to 85,  during the last weeks of September, witnessing  a change of seasons with the sirocco winds blowing in  to herald the beginning of autumn.  Our 'perch' above the harbor gave us an unparalleled view of the workings of the town - sights, smells, sounds - throughout the day, into night. What we couldn't see from windows or a roof terrace we easily spied in short trips foraging  in the streets and surrounding countryside.
What makes a village is being able to become familiar with the patterns of people in only a few days.  We were lucky to be staying in one of the old Venetian buildings overlooking the iconic lighthouse and mosque that mark the port - symbols of past centuries. Ruins are everywhere, in progress of being charted. It was a humble reminder of history's broad sweep to see in one of the stately shipbuilding edifices open to the public along the harbor  a copy of a 16th century BC Minoan ship made to order for Greece's 2004 Olympics. 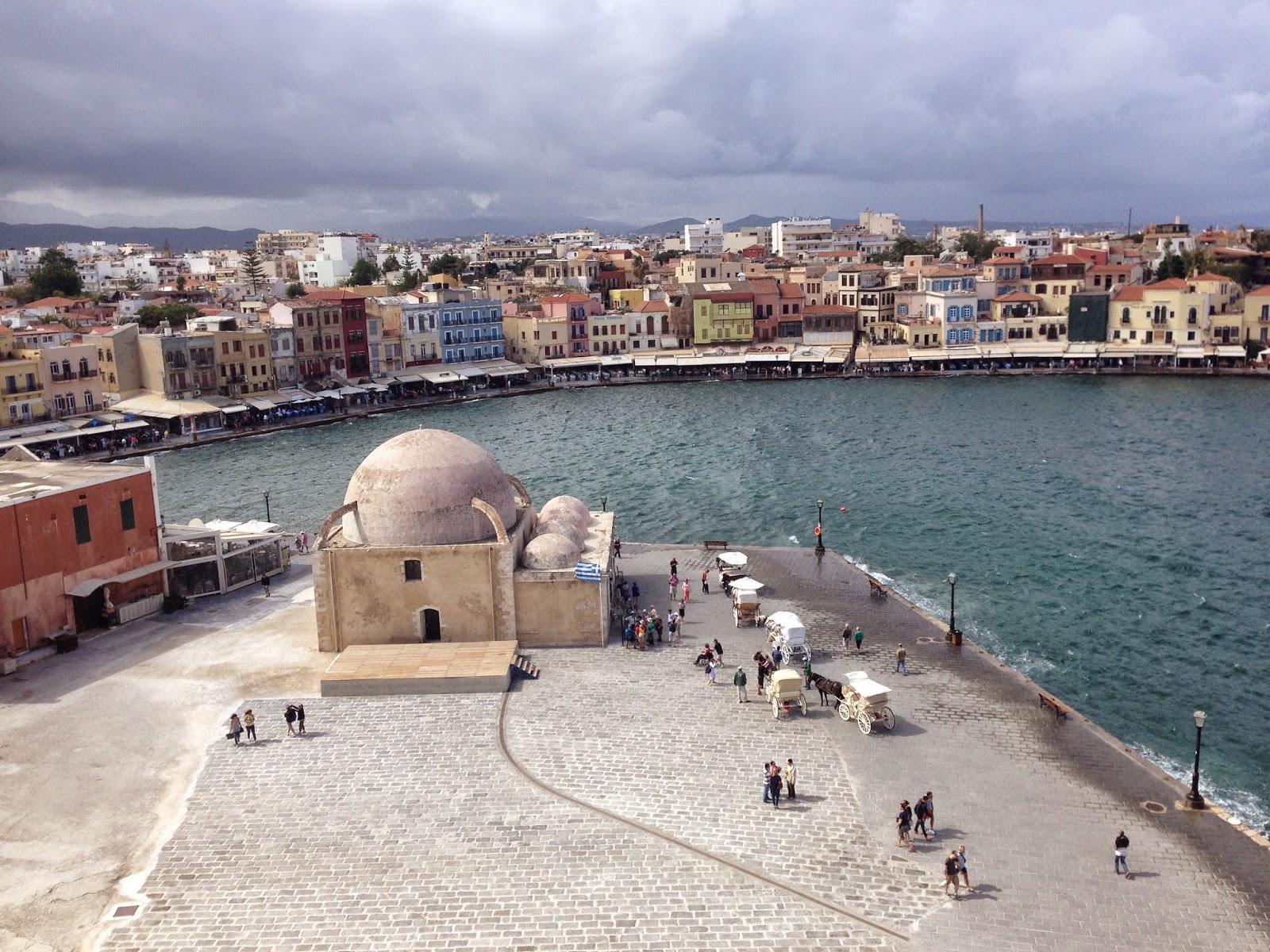 Our perspective was providentially skewed as temporary denizens of Dorothy's Dream House www.dorothys-dream.com, which has a special history of its own. The duplex  available for rental for groups of six (or more) was named for an American woman artist who made Chania her home for decades, cementing friendships with many of the people who still live there. (The mosque one night was the venue for a show of resident artists' works but no longer does a muezzin send out his call.) Back streets, beyond the more overt commercial  byways - surprisingly full of brand names in English - artisans sell their wares in small shops under bougainvillea trees.
The hills above town are wonderfully forested  - row upon row of olive trees in differing shapes - between open areas where livestock roam. In one  minuscule village we feasted the afternoon away on locally grown food cooked solely on wood in large decorative clay pots. Customers eat what host Stellios and his wife made that day, accompanied by homemade wine. Pork and goat, greens and salad - traditional Cretan fare - served under palapa-like shelters in a hearty breeze.  On hot days we could walk to a town beach only minutes away for a swim in clear waters. Or stay secluded and cool in Dorothy's living room, feasting on a splendid library collection. Other excursions took us to Balos on the island's far western peninsula, where dreamy blue-green waters curling on white sand drew all too many others like us willing to take a rocky hike down to - alas, the all too busy beach. (A curse of sorts: the site is often found on the cover of Greek tourist brochures.) Another time we hiked at one of the area's famed monasteries where we could then buy homegrown oil, honey and wine. Crete is country unto itself, and Chania one of its  treasures.
Posted by Urbanities at 1:34 PM 2 comments:

Merger isn't the most apt word. since what's happening is more of a temporary partnership between two leading arts institutions in the most institutionally minded city in the country. To wit, the National Gallery of Art www.nga.gov and Kennedy Center for the Performing Arts www.kennedy_center.org have combined forces to celebrate  Edgar Degas' iconic sculpture "Little Dancer Aged Fourteen." An original musical based on the piece debuts in Washington (at Kennedy Center) Oct. 25 at the same time on ongoing exhibit is open at the former big league venue.
What lay behind the collaboration is a sequence of largely unheralded events, beginning with director/choreographer Susan Stroman  asking the show's writer Lynn Ahrens "What was she thinking, do you suppose?"
That was five years ago. The woman these two Broadway power women had in mind was the teenage ballerina named Marie van Goethem who first posed for the artist in 1878. The statue (or statuette, the Gallery's term) that Degas labored over for many years may be the only one of his works that never travels, its unorthodox materials a mix of beeswax, clay, metal armature, rope, paintbrushes, human hair, linen, silk and rubber, cotton and silk. She might be brooding or bored but the low forehead, jutting chin, outstretched leg, arms behind her back is a compelling stance.  Stroman and Ahrens couldn't let go of their question. (Marie was dismissed from the Paris Opera Ballet in 1882 and her fate is unknown; long live American musical  as a revival forum.)
Deborah Ziska, NGA's press head, one year ago broached the possibility of timing the current NGA exhibit ('Degas's Little Dancer")  with the  world premiere of the musical (which the Kennedy Center is producing) and rallied the gallery's marketing team along with Dodge Thompson, the chief of exhibits who oversees gallery curators.  Deborah Rutter, Kennedy Center's new president, in describing the musical as "a little bit of history and a little bit of magic,"  hailed the cooperative effort  as "an example of what institutions ought to do."
Let's have more.
The gallery's exhibit runs from Oct. 5 to January 11 and is presented with several other objects from their collection, including an oil painting and a pastel from the Corcoran Gallery of Art.
October 5, 2014–January 11, 2015 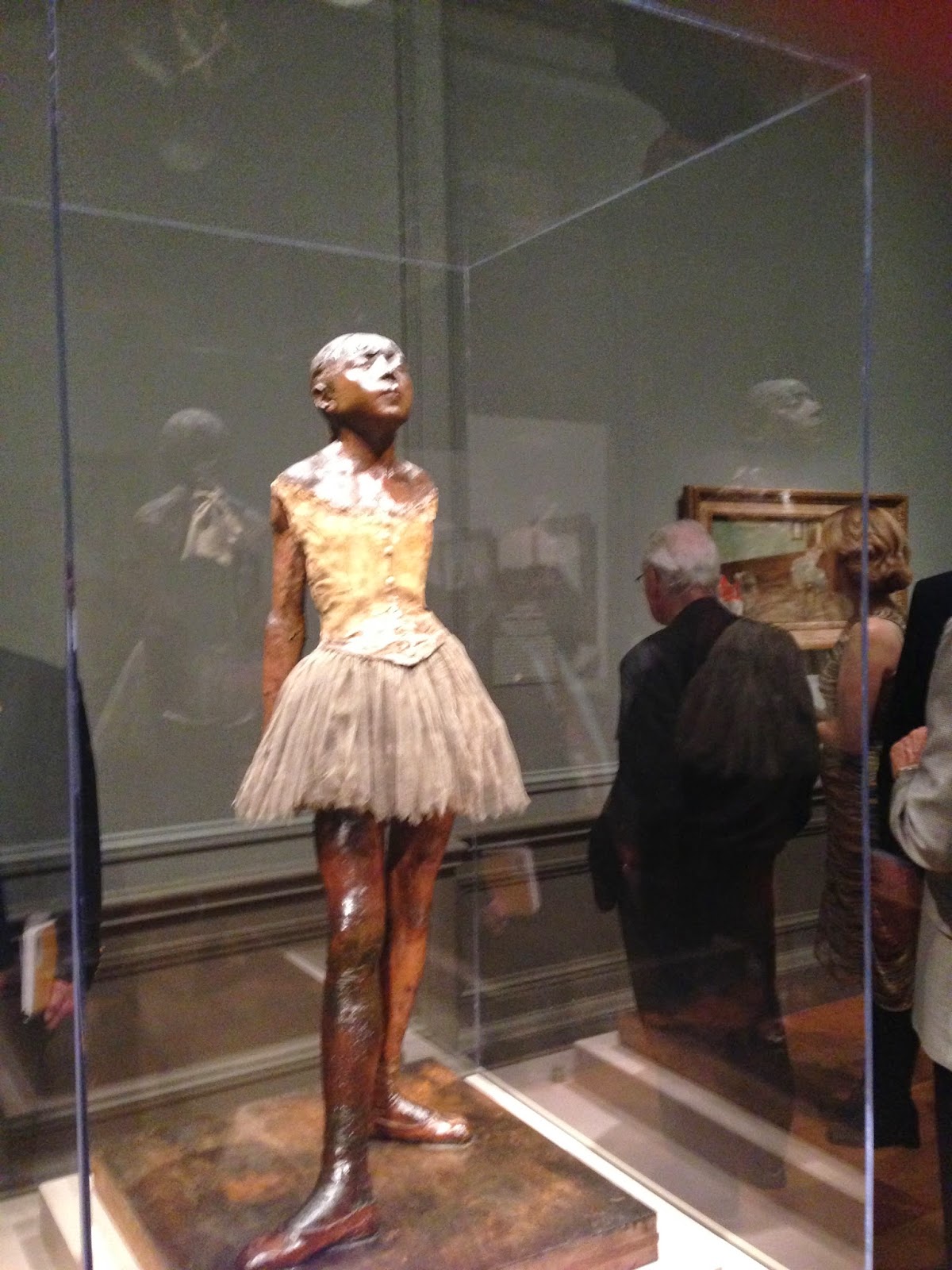 Posted by Urbanities at 7:02 AM No comments: