Coming home on the plane to DC I meet a couple just out of high school going rock climbing in South Africa. Why South Africa? Why go all the way from Bozeman, Montana, their home, to such a faraway place to hoist yourself up a sheer rock face?
Because 'it' is there - sensibly enough. And their planned activity somewhere outside Cape Town represented a higher challenge in a country than what they had, or had conquered, at home. Ambition strikes in strange ways. One was taking a gap year, presumably to do more climbing, the other was planning a first year in college. Boy and girl; man and woman. Both dressed 'down' with backpacks full. The larger pack had been held up briefly in security while the uniformed agent tried to figure out the pieces he had found of a drone.
No problem hauling a disassembled drone through the airport apparently. Except that isn't the usual object detected under high resolution x-ray machines.
They would take a record of their expedition on video. They were meeting up with a coach and a few others. This was serious business.
I was struck by the coincidence - Olympics coming up in a month and these young hopefuls already training for when the IOC recognizes rock climbing as sport worthy of medals. The pair felt sure it would happen eventually. Meanwhile, they were getting ready.
A chance encounter between cities. Perhaps a point worth making: Use time aloft to learn and never give up the chance to engage.
------
Going and coming on several airplanes a few weeks later: In  Athens  headed home to DC via NYC (coming hours earlier from Chios), I meet two enterprising middle-aged American women - friends traveling together. I initiate talk and immediately hear  dulcet deep-south Southern speech, a wide smile, and  immediate connections. They are  from Shreveport,  La., a nurse and a teacher,  seeing Greece for the first time: three days in Athens, three in Santorini, and an 11-hour cruise tour of Hydra, Paros and Aegina. All fine - wonderful. "Everybody friendly. No difficulty with language." They booked the tour themselves. Their husbands 'don't like to travel,' one says over a cola and a bag of oregano-flavored  potato chips. "Mine went golfing in Scotland once. He might consider going there again, but.."her voice trailed off. The two got to swim, walk the Acropolis, love  the food.
Had they worried about news of terrorist attacks in Europe? Not at all. "We were told not to worry because Greece is neutral." (That isn't a description I've heard before about the country.)
Then on leaving, headed to their gate and flight home, they turn over to me the rest of the chips and wish me a "safe journey."
Later, I realized that I had encouraged them to tell me their adventures to avoid asking them  their views about Trump vs Hillary at home.
-----
Safety certainly wasn't my concern on my ten day sojourn  on a beach in Chios. Rather, it was the errant habits of airlines under pressure in high season. Computer glitches (caused on Delta by malfunctioning circuit breaker switch of some kind...), thunderstorms, etc. Take your choice and chances. Take books. Drink water. Smile a lot and say thank you often, since the people in charge of the journey are inevitably overworked and overstressed.
"Safe" in fact might be the best word to use to describe the not-quite-a-village of Agia Fotini - a small community  20 minutes from the port of Chiostown on an island famed for its production of mastic resin used in the manufacture of many everyday goods. (Lipstick, gum, etc.) As islands go, and as Greece goes in a time of general  economic hardship, Chios is relatively prosperous though the tourism sector has suffered a severe blow recently with the  loss of   Turkish visitors following the aborted coup in that country. (Anyone with any affiliation with any government agency being rounded up...even jailed.)  Turkey's landscape- and some sort of wind farm - is visible from my beach where last year migrants fleeing war-ravaged homelands turned up daily in fragile overcrowded dinghies hoping to win asylum in Europe. These aren't the 'tourists' that Greek needs at the moment though the country is sheltering thousands in camps on the mainland due to a breakdown in relations between Turkey and the EU (which, ironically, Turkey hopes one day to join).
A weathered sign in English spotted high on a lamppost by Chios' domestic bus station near outdoor cafe tables where locals play backgammon with ferocious intent : "We're all migrants. No one is illegal." 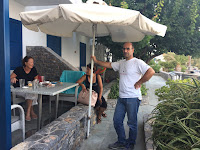 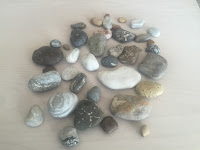 Another different kind of sign on a dead end lane bordering Agia Fotini's beach reads 'Theoxenia,' name of a complex of studio apartments owned by hosts Maria and Dimitri Pelandis. The word in Greek means that visitors are gods in disguise and must be treated as such.  ( Greek hospitality at its finest. ) The beach itself is a welcoming sea of pebbles, with clean cool waters of exceptional  clarity. Who wouldn't want to fly thousands of miles to swim there? Though the sensation is complex. The sea is both boundary and road, a watery link between two worlds. Immersed in water, a person is suspended - thoughts adrift like the body that feels nearly weightless in its salty balm. I strike out to do  laps (it's Olympic week in Rio) and then stop, aware of such a fruitless endeavor: why make the effort - to what end? Better to enjoy a heightened awareness of this privileged place. Meditation in situ, a whole lot better than turning bicycle pedals in the gym.


Posted by Urbanities at 7:04 AM No comments:

All rise for Tippet Rise 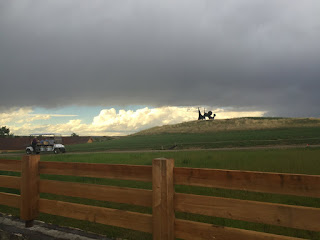 The name alone is unusual enough to attract attention. But to witness what the words represent is  astonishing even when experienced on a chilly rainy Saturday outside Fishtail,  a small town in southeastern Montana one hour from Billings, the largest city in the state and not a place known for larger-than-life cultural attractions.
Tippet Rise is an ambitious new arts center -  possibly unique  - that opened mid-June on a 11,600-acre working ranch that is about as remote as any city sort can only imagine in a movie. The center features musical performances of a high caliber  as well as large site-specific sculptures in commanding locations across the landscape. Owners and instigators of the project are Peter and Cathy Halstead, a couple in their 70's - visionaries with the money to make real their dream. Cathy has a Grey Goose Vodka fortune behind her; Peter, a poet and pianist, other income sources allowing them to hire and inspire top performers as well as architects and acoustical engineers. It's one of those  gotta-see-it-to-believe-it creations.
Perhaps most remarkable  is that they were able to bring it off to such high standards seemingly without compromise. But then Montana, praises be, often surprises the die-hard urbanite. Locals know not to be surprised - or act overly impressed - by heavy professional credentials worn with panache. Caterers in charge of the $10-per-person late afternoon barbecue that  rainy Saturday afternoon included a Fishtail man who had trained at the Cordon Bleu in Paris. The buffet was scheduled to feed patrons who had come to attend both an afternoon and  evening concert dedicated in turn to the music of Beethoven, Schubert and  Messiaen.
Many in the audience had bought tickets - priced at only $10, with persons under 18 free of charge - for both Friday and Saturday events and every other weekend to come. through a final week in August. The opening season sold out quickly, Billing residents being among the most avid subscribers.
GPS will get you there but mobile phone service wasn't available (on purpose?) in the hall, called the Barn and named after Halstead family members like other equally well-planned structures on the grounds. Low-key garbed Mr. Halstead provided introductory remarks outlining the two Messiaen pieces, his long white hair and beard peeking out under what looked a cross between an Australian bush hat and a Canadian Tilley.
"City people have everything brought to them," noted Chicago Symphony clarinetist John Yeh, taking part in the second half of the program. "Here people have to go to it,"  he said approvingly. (It also helped that he found the acoustics in the Barn "perfect," and was impressed by Tippet having no less than 12 Steinway pianos on the premises.) An attentive, appreciative audience numbering no more than 100 sat in canvas-back director chairs under a large silver Calder  sculpture hanging overhead. Another Calder, an arresting black steel stabile, greets visitors near the entrance of the site - on loan   for five years from the Smithsonian's Hirshhorn Museum in Washington, D.C.

Posted by Urbanities at 1:00 PM No comments:

The storied Chautauqua Institution has such a golden reputation for its P.C. outlook, its prim almost precious profile, that it can be difficult to see its crazier - let's say whimsical and wondrous - side.
A recent trip (theme for week one, late June into July 2016: "On Creative Expression") very nearly convinced me the handsome lakeside gated community was for many reasons about to become chic. As in 'sought after,'  'popular,' 'a model of its kind.' The current demographic definitely skews 'senior' - as might be expected of a place where families have been coming for years and only reluctantly give up property - mirroring the national trend. (Oldsters staying older longer.) That doesn't diminish individual capacity for good works and inspirational activities. A very retired ob-gyn doc named Herb is a fine example of this. He makes lemon tarts and sells them to benefit the Chautauqua Foundation. Tarts made with such finesse that any professional chef would applaud. So Herb, who hand delivers tarts to a buyer's fridge, wrote a book about them that is sold in the very well stocked bookstore on the premises. The organist who plays what is said to be the oldest and largest 'outdoor' organ in the world cheerfully steps up  between numbers to talk about being adopted and how he came to find his talent. He performs at noon in the open-air (on the sides) amphitheater that seats as many as 7,600 thousand at a go. On the same commanding stage where 80-year-old Alan Alda and his wife sat recently talking about their lives to a capacity audience.
Think any of this unusual? Try putting together a daily schedule of such varied events - and more - and find anywhere else that can match it. A 'resort' that has as a central feature a vast green lawn banked at one end by a stately up-to-date library.
Posted by Urbanities at 6:32 AM No comments: