June is bustin' out


Yes, the first  week of the fourth month for the virus  burst forth with fury and indignation and the virus surely part of it: long days being cooped up and then assaulted by another senseless murder of a black man by a white policeman that followed an earlier senseless murder in another town. Would the drama be different if the so-called law officers had  been black? That isn't the question of the hour, obviously. The surprise was how the explosion of energy and anger so quickly became universal.
Otherwise, the month opened with the 'soft opening' of society in different ways, different places - a sounding board and test of personal discipline. It pointed to a maskless future only when seated outside with only a few people who were not allowed to get up and move around. (I used the restaurant's bathroom anyway.) The  fourth month of the pandemic also showed how little society has learned - or how difficult it will be to know much that is definite about the virus in the future, or even about the society itself.. 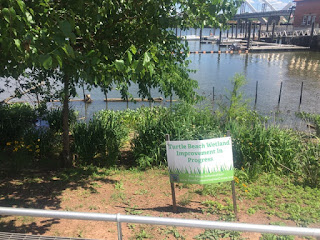 Look carefully through the trees and see a small creature taking the sun on what appears to be a log. He/she turtle may be one of few living beings unconcerned about the world at the moment.

For diversion, a return to the mundane daily partly comforting matters of being able to complain about trivia. I write as a victim of Trader Joe's vaunted frozen food offerings, this one called Shrimp Tika Marsala, and the sad realization that I have been had every much as voters are being 'had' by a president who has no concept of what a leader should be. Like DT, TJ outsources most of its food offerings that in this case presumed a pretty package of vial and dangerous ingredients would be a satisfying dinner for a single person isolated during
Covid  (Will future consumers and other people refer to this period as such?). The percentage of sodium, saturated fat and such are astronomical. So shout out, complain, get rid of the purveyor and start cooking for yourself again - not be seduced by the easy living beautifully packaged goods of no value. Mea culpa: of course I could have checked the percentages of sodium and salt on the package beforehand. My greedy hand thought to save some steps in a newly cleaned kitchen. My lesson of the day: more greens, less paper. Obvious lesson: a leading path to death from Covid is a bad diet.

As the days go by, so does my tally of both the smartest and dumbest things done to weather the storm of silence. One (both categories?) was becoming a total addict of the New York Times' cooking pages - online and off.  By now I  have dozens of mouth-watering temptations that, put in practice, may result in  maybe one success out of five. (Who likes having to divide numbers meant for four or more when only one person is eating? ) Another that looks dumb may not be so in reality. On daily walks, I pick a theme - to study rooftops, the numbering on houses, choices of paint colors. At home I keep on hand a  notebook in which to write the  blizzard of notations coming at me from various media, chiefly entertainment. Then I fail to watch none of them.
For better or worse.

But there are some compensations in being forced to wander locally in new places for exercise. My own observations are an ordinary sort that have been previously catalogued by experts in the area. I get an amateur's reward compiling lists of such things as: notable architectural features of homes on Capitol Hill that keep me taking trips outside my own domain. One time, once employed, I made a photographer accompany me on a story about finials. Of course, she did'n't know what I was talking about - few people would - and when I told her she was miffed. No people in that story, no emotion.  I was at a loss to explain my interest in them - but such are the ways of offbeat living. On Capitol Hill, we have German siding (which see), iron balustrades  (what's that? I have to look it up) and railings, peculiar decorative wood pieces  of arabesque design,  and plenty of finials. Plus a few other eye-stopping features.  Special windows I'm sure. Impressive to the nerdy and newbie. Not likely a Pulitzer prize here so we dropped the finials story but I didn't give up loving trivia and the social and architectural history behind it all.
Note: finials are 'distinctive apex' primarily atop a roof pinnacle. If that helps.  A balustrade is "a railing supported by balusters," which does't help much at all.

Another nice thing about walking is the chance to snap a photo or two .Yesterday I took one of my neighbor across the way, down to his shorts suntanning on the roof in a towel-covered deck chair, eyes closed, doubtless a drink in mind. He might mind that I did, but since I don't post with names and addresses I think he is spared retribution.
At a snail pace it's possible to jot down a note or two. I have notebooks in every room of the house, usually to cite books, events, movies we the stay-at-home public always are being offered (now more likely with a price tag). I put down telephone numbers, restaurant menu items, assorted this and that until it all becomes too much. No one ever before - I like to imagine - has been through this quiet promotion of such engrossing variety. To the point that I ignore it all, or most of it. Too much of a good thing leading to a very bad conscience.
Coping and compromising has become the new slogan, irony the best medicine leavened with humor.

What have you/we learned from the experience of 'lockdown' might be a worthy question except it's complicated by so many personal factors - ie a person alone vs family members; inner city or suburb; healthy or not. Why it seems so hard to answer: getting a grip on one's power of concentration. Whenever I try to think through a question/subject, I am reminded of the toy tube through which one can look and turn to observe a multitude of moving lights. The slightest move of your finger changes the focus - and the scene. Sitting at home alone brings distractions aplenty (sirens, dings, hunger pangs whatever) - and angst always. The known and the unknown keeps changing everywhere. Better to read and try to lose yourself in another life. Or get up and do something: maybe something feel-good, to shake off the shame of not being useful.
Hence, the friend who volunteers to drive food donations from a restaurant or packing area to a hand-out site somewhere across town. My own shallow effort recently was spending many dollars in the nearby secondhand (repurposed, whatever you want to call it) woman's clothing store on its opening day. Contact tracing, sanitizing lotion, distancing, limits, etc. all in place. (Including a steamer to 'wash down' everything a shopper tried on but turned down.) I bought nothing that I needed - but saved the environment, right?  Put money into the owner of a small local business. In exchange, I felt treated to a rare theatrical experience - interchange between strangers, fantasy wishes presented by a display of colorful designs and fabrics. Though nothing to compare with the action of a young friend who found herself prevailed upon inside Washington's Eastern Market by a masked stranger asking for money. He was black (now Black?), she was blonde White. He was hungry, he said. "What are you hungry for?" she asked. A woman of strong street instincts didn't expect he would confess "a smoke,'  weed or drink.
"I'd love some pig feet," he answered. Right away she turned to the Hispanic behind the (plastic shrouded) chicken counter and ordered three. Why three? "It just seemed like a good number,"  she says, never having seen much less eaten pig feet. The clerk looked surprised , almost as much I suspect, was the man. One good-sized foot cost $5 so she took $15 from her purse and handed the package over to the man. It's this young woman's style to enter into exchanges with strangers, her own sense of theater perhaps. 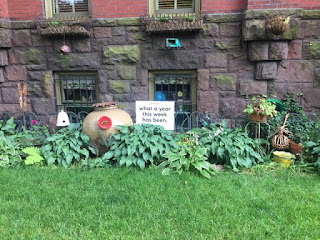 Posted by Urbanities at 8:49 AM No comments: