The subject is routine: differences in 'quality of life' between Washington, D.C., and New York (meaning Manhattan and/or Brooklyn). From whose perspective, you may ask. Take a genial 35-year-old single man earning minimal income: where is he to find housing in 'hot' neighborhoods in either place? He once lived in the upper reaches - black and Hispanic - of Manhattan and now resides in a decidedly - but probably only temporarily - 'uncool' outlying D.C. neighborhood without a car. He walks 20 minutes to Metro, where previously in New York he sat on the stoop of his close-packed Manhattan dwelling and was the only white man on the block. Compare 'quality of life?" He was never mugged until he came to DC and lived for a time in the still-developing Shaw - and lived through the experience three times, the last time with a mugger who shook his hand after robbing him, saying 'Have a great day.' What does he conclude? That he never feels really safe in DC; that hostility by darker skinned people towards him is much more prevalent in DC. In New York, he actually was warned by his stoop fellows to be careful. In a way, they looked after him, feeling one of them since police assumed he was a downtown whitey coming uptown only for drugs. What explains the disparity? Southern blacks with a more vivid history of slavery in their ones populate DC, where Caribbean natives or offspring are more common in NY? The population density in Manhattan lends  itself more easily to familiarity, hence even family feelings? Who knows...
Posted by Urbanities at 7:37 AM No comments:

Portland, Oregon -  at last. High anticipation  from one who never had seen the satirical show on TV- or I might otherwise have seen "the city that works'  (its favorite slogan) through cracked lenses (as it were).  I had newbie's eyes wide open, ready to be charmed. Which was easy, given  the first day's sunshine and low humidity, the abundance of cafes and smiles. Chalk one up to the airport bathrooms, first of all: toilet handles painted green with a sign saying they are treated against germs. Handle up for liquid; down for solid waste. What could be more sanitary and efficient and environmentally sound....
Then there was the comfortably solid looking man behind the Info desk in the lobby of the Portland Building, David Muir by name. (Read on to see why this is the one building in Portland I had on my list to visit.) He had received a plaque for being some sort of superior citizen in his role of greeting visitors and directing them around what is a 15-story municipal office building next to city hall and headquarters for the city's service agencies. I wanted the day's New York Times and the newsstand in the lobby was closed for some reason that afternoon. He wasted no  time reaching for the phone and dialing up the nearest  Starbucks, asking them to put aside a copy for me. That led to a conversation about why all the tragedies of the week were being portrayed so graphically on front pages of newspapers. 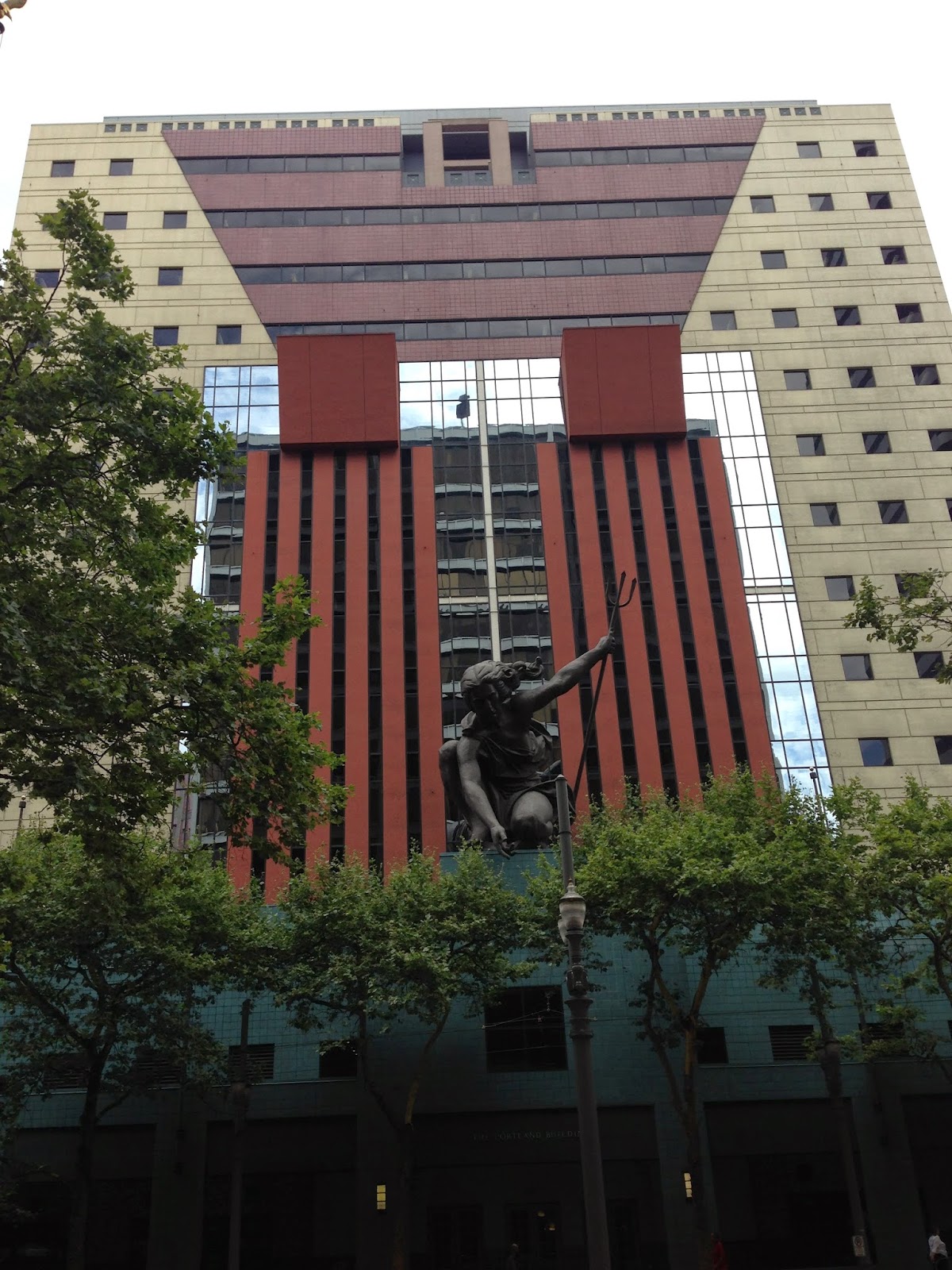 Ah, Portland, the last holdout of the sanctified.
But it was the sight of a crew in blue on trams marshaling riders in person to see who was a registered voter and, if not, why not - sign right here. Young friendly faces patiently approaching strangers who, like as not, looked up in annoyance. It was a contract job, conducted by FieldWorks (see the web please). Nonpartisan, bipartisan, what have you. The first of its kind I've ever witnessed in any city in the world.
One free bus later my friend and I are deposited outside Portland's famous rose garden: masses of them, even bluish purple blooms, lined up in squares across rolling acres on the north side guarded by tall stately pine trees. Another welcome face, only a bronze statue this time: model of a man called a Rosarian, the official greeters for the city who traditionally turn out in white suits. Why white? Who knows. And the jolly bus driver so willing to put all us tourists straight about the what and why and where. Public restrooms in Pioneer Square, the open center for visitors to mingle or simply rest on stone steps while perusing the next sight on their itinerary. Ok, so back to Michael Graves' magnificently eclectic Portland Building with its landmark status. It cost $29 million to build, opened in 1982, has a green roof installed in 2006 (so goes Portland) but workers there are said to hate the place.  It works on the outside: a colorful range and variety of surface materials and decorative touches that made its mark as one of the early and most successful Postmodernist structures of this century.  Anything but gray steel and predictable straight lines.Like a phoenix rising from the ashes of contemporary blandness. Ah, but there was apparently not enough money to ensure its functioning features. A debate currently rages (as debates are said to do) whether it is a tear-down or a remodeling job. My vote, probably the majority now, is for the latter. Keep Portland green but not boringly so.
Posted by Urbanities at 1:28 PM 1 comment:

You had to hear it to believe it, the July 3rd tribute to our national anthem at the Library of Congress, celebrating a very rich 200th  birthday. Spokane-born baritone Thomas Hampson was the man in charge, more or less, humorously and tunefully assisted by University of Michigan musicologist/professor Mark Clague ( a former bassoonist, these are really talented men), for a two-hour program - free to the most eager  as most of these things are and, equally free, now on the Web under various headings. Do check especially www.loc.gov/collections/songs-of-america. Our  often-maligned patriotic verses began in 1775 - the music anyway - as a tribute to the sixth century BC Greek court poet Anacreon by members of London's Anacreontic Society (yes, keep reading, it gets better). The  ancient  poet had apparently "entertained his tyrannical patrons with lyrics celebrating wine, women and song" - BUT the society varied its interests, by having two hour symphonic music to head up its meetings. It was a musical society, the tune composed by one John Stafford Smith, presumably a member.
Oh, it gets better. The program of "Poets and Patriotism," included renditions of the anthem in German and Spanish, as well as the Abraham Lincoln 'Letter to Mrs. Bixby" set to music by contemporary composer Michael Daugherty. And anyone wishing to know why this most 'athletic melodies" (i.e. Star Spangled Banner) took root should consult LOC.  History is as complicated as the humans who make it happen. Hampson is a marvel, his voice a miracle of nature. He stood tall and commanding to the end when the entire audience stood for the final rendition, hands over hearts, fronting the University of Michigan men's alumni choir.  I may never have or see a better holiday/anniversary celebration.
Posted by Urbanities at 3:04 PM No comments: