My welcome to Emilie's the night before dining there:

The newly anticipated restaurant in my Capitol Hill neighborhood is named Emilie's for no reason that I can see. Nothing on the menu, or rather what passes for a menu, which is a handful of  prettily printed pages listing an array of dishes. The pickled things on one. Side dishes on another, then 'family' items or maybe all that is just how I remember the jumble of instructions and staffers coming by. Emilie is every one of these smiling folk, apparently, the first  choice being the usual  question of plain or sparkling and soon wine selections by the glass. We're offered a sample of two temptations, no problem to reject one in favor of another. The wine steward is an especially vivacious woman - talkative and smiling. She drops by, answers a few question and soon flits away. This is a large ground floor operation spreading over, it seems, half the block of Pennsylvania and 11th with a round inviting colorful bar in the corner entrance room.  The place is full, buzzing at 7 p.m.on a week night. We were no doubt lucky to find a spot open at the last minute the day before -- but, as is the custom I find, reservations could be made only online and only for one month ahead.
I'd come in person the day before "as a neighbor," hoping to score, thinking 'local' was the winning word.  It took some time before I was told I had some luck for the next night though I couldn't book on the spot. A multitude of digital communications followed. I had to leave a credit card number to vouch my interest, with the warning each member of my party would be charged $25  - on my card -if we didn't show up. We were in danger of losing $100 on a night of wretched traffic, with three of us coming from far away. Confirmation had to be definite by 7 p.m. the evening before.. Reminders began: to confirm please reply confirm. To cancel use cancel. The next day I was told that my party was due in 30 minutes. It seemed  no excuse was acceptable: the computer was holding us hostage.
Such is the new norm in these high-end establishments where the bread (shockingly) can cost $9 for a single piece a person and have nobody complain. Where so-called main courses can resemble fine art rather than memorable - if 'interesting'  visually - food. Where, in small print, is the notice that 4 percent is added to the bill for the sake of staff's  health needs. Entertainment at least is free: the chefs working hard behind a counter that takes up half the room.
Posted by Urbanities at 2:16 PM No comments:

Hard to predict what brings about spontaneous conversations between strangers on a city street. Most likely, I'd wager, they occur after inadvertent physical contact, say between bicycle (or scooter) and pedestrian. Such are the joys of a busy pathway, scene of a recent close encounter when the two headed in the same direction, scurrying along unawares. The young woman perched on an extra wide handle two-wheeler whizzed past within inches. "Whoa,"  was all I could think to say. Which brought her to a stop and a look of annoyance on her face . "Would you consider maybe putting a bell on your bike, or some device to help warn people?" That wasn't what she expected  - someone slowing her right to  ride. "You could hurt someone and then have a nasty lawsuit on your hands." I hurried to say I wasn't criticizing her choice of the sidewalk - it's free for everyone after all.
"That's what the children I care for have on their bike," she said, thoughtfully, agreeing - a compromise on her part, I could tell. My suggestion at least made her pause and consider the idea and left me pleased (deceived?) thinking that at least civility had won the day. I walked on imagining she might actually purchase a whistle, horn or bell. She rode away, happily free.
----------------------------------------------------- 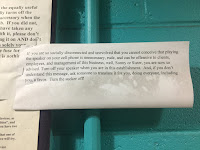 Sometimes it only takes a quick look at a bulletin board to be content that citizens are indeed monitoring public spaces. Above in small type, carefully printed out warning to random folks coming to a car wash to observe some underserved common courtesies. Protect the public realm, the note implores. Let others enjoy the intimate silence of their own smartphone conversations without having to listen to strangers blabbing aloud rudely in the waiting room. Off to the side was another printout, of names of those who fled the scene without paying a dime - the damned forever unwelcome. And the humorous notice posted above the entry way, before customers give up their keys, about what could be  carelessly lost and forgotten in their vehicles so that they dare not charge the employee with pilfering....