How much evil is sustainable, endurable? Is it even possible to know?
Two shows currently running this spring under DC Shakespeare Theatre Company's umbrella are, in  what seems a coincidental way, exploring just such a theme. With the ultimate question: is human nature  open to change?
There is racial  and gender prejudice, domestic violence and state-sponsored terrorism - not to mention murder - on full display across the Lansburgh and Harman Center For the Arts stages through early April .(See www.shakespearetheatre.org) If nothing else -  if your emotions can stomach the display - both '1984' and 'Othello'  are epic illustrations of mankind's most depraved ambition for power. Curiously, both are standard reads in high school English classes but what  effects they have at a singularly  impressionistic age is impossible to know. Both are  cautionary tales that apply to present day events: the overreach of government intelligence agencies investigating civilian correspondence as brought to light by Edward Snowden and  the unthinking paranoia exhibited in attacks on Muslims and on migrants both here and abroad.
In the George Orwell epic, set in some presumed future day that could be now, Big Brother in the form of masochistic overlords subverts the core values of democracy, using torture to achieve its ends. (The U.S. government's sanctioned behavior towards prisoners in Iraq.)  Shakespeare's classic tragedy relentlessly drives home the corrupting influence of envy and jealousy, as Iago sets out to destroy Othello, the dark-skinned Moor,  whose wife Desdemona becomes the victim. (One among many.)
Rumor and suggestion alone turn Othello into a mad man obsessed with revenge to satisfy the aspirations of Iago. But to what end? Truth and justice are employed too late. Similar manipulation occurs regularly in the halls of Congress, where powerful interests are endlessly competing for influence. Similar disregard for truth reminds a person, too, of behavior  by some candidates  in the current presidential contest hoping to sway the voters by whatever means at their command.
Posted by Urbanities at 10:27 AM No comments:

The more famous  White Way, the Great one, is Broadway where the night light show is incomparable around Times Square. theater district.  Our DC SE strip hardly compares in color although in fair weather on weekends a few blocks are thronged with enough evening crowds to resemble a tourist invasion....even if there are no comparable theaters here  and the sole entertainment venue soon to open is a Miracle movie house for "family fare."

The landlady hoping to rent the gorgeous gray Victorian structure that is Shakespeare Theatre Company's present headquarters says she is having a hard time finding a new tenant for when STC moves on to the planned Bard complex being built in Southwest DC next to Arena Stage. She happens to be - longtime Capitol Hill residents take note - daughter of the man who owned District lock and hardware store, now occupied by Ted's Bulletin. Now THERE's a very good tenant, she says of the latter.

What does  this  portend for future businesses in the area? Do small family owned operations have no chance?    When is enough enough? Hard to predict when property taxes keep going up and local residents keep  hyping the advantage of a TraderJoe's coming next year- another chain store enterprise. Will TJ pretend to have neighborly feelings or faith and should they?

Posted by Urbanities at 12:15 PM No comments:

One year ago this month the DC Commission on the Arts and Humanities put out an open call for artists to submit proposals for truck art - yes, large murals to wrap around the sides of recycling trucks. (http://dcarts.dc.gov/page/designed-recycle) 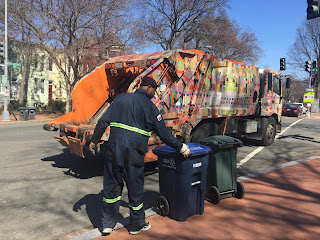 (At left: "French Trip" by artist Erin Curtis.)
Ten of these colorful murals have been rolling (and clanking) through the streets of Washington and are expected to be there for two years as another example of public   art work funded by DCCAH. (Remember the elephant and donkey sculptures that still may be found occasionally, mainly in residential spaces.) You have to be lucky to catch a sight of one of them, as even the chosen creators themselves have found, but they make a dazzling display when you do. Large dimensional mainly abstract designs covering all sides of these monster vehicles - a reason to stop and pause while  hard-working collection men (any women?) drag and tip the blue recycling bins into back bins that  open and shut  automatically like a mighty maw.

Artist Pat Goslee submitted a dream-like painting entitled 'Tale of Three,' inspired by some recycled fabrics in keeping with the general theme. (She found detritus such as netting on city streets.) "The fabric of life as a field of interconnected energies," she writes. "Three small seed forms - each representing significant family roles: parent, child, sibling...." intended to 'invite the viewer to dream and to make imaginative associations."
Recycling is "'a key part of the cycle of life' she adds A digital image of the original painting was printed large on vinyl material similar to what is used for ads on Metro buses.
She felt honored to be selected, she says, calling the project "an interesting way to use an existing work of art. Its public art, it addresses an important environmental issue." Those chosen received $2500 for their effort.
Only problem is Goslee has yet to see hers in action...

Posted by Urbanities at 10:46 AM No comments: