Within less than a half mile of my house, not far from the U.S. Capitol, some memorable scenes  unfold that speak in different ways  to the variety that is the spice of city living. Not always uplifting but always energizing.

A: A disheveled  mentally disturbed woman 'of a certain age' (is a man ever that same age, I wonder) walks out suddenly to a popular street corner near Pennsylvania Avenue SE and begins shedding her clothes. All of them. It is a warm day for sure but one that hardly calls for going naked in the streets. She chooses - of all places - a spot opposite young Marines who are guarding their base, home of the Marine Corps commandant. Two witnesses reported this to me - and how quickly one of them dialed 911 to alert police, or an ambulance. Doubtless, she was quickly hustled into a private space and either taken away for confinement (i.e. an examination) or simply told to dress. These same witnesses now see her frequently roaming the streets - it is autumn now - mostly covered. Freedom from constraining garments must have felt wonderful while it lasted.

B: An Eastern Market vendor  regularly hauls a load of every imaginable sort of goods for sale in his tent along 7th Street SE, closed off to traffic on weekends. On this particular day, he brought used furniture that caught the eye of a strolling shopper (i.e. tourist) who inquired about prices. Savvy vendor saw the chance to bargain - if only to be able to sell off heavy items he would then not have to pack up and take back to storage. His customer, eyes brightening, loved the deal and asked if vendor had more of the same to bring him the next week and possibly deliver the goods to an address on Chain Bridge Road, just the other side of the Potomac River, in Virginia. That section is known for extremely lavish and expensive homes. Lo and behold, a large amount of cash was paid; a personal card produced - exciting the vendor who recognized the place. What he didn't at first realize that the man was likely a Saudi Arabian prince, if not the ambassador himself, whose wife and friends were seen, well covered, farther  up 7th Street.  On delivery day, vendor passed through two gates manned by guards with guns who then escorted him up to the front of the mansion.
Vendor now awaits - perhaps - an invitation to tea.

C: At a recent open house sponsored by my local Firehouse (Truck No. something, I forget), coaches stood outside the open door hailing passersby to learn 'Hands-Only CPR For Witnessed Sudden Collapse." First on the (English and Spanish) printed list of instructions was a warning to 'check the scene' - ie. be careful you, the observer, are not part of some personal feud that might involve bodily harm to yourself. Only then, check the person. Ask/shout 'Are you okay?' after a shoulder tap. Next, if no response, call 9-1-1. (This supposes your own emotional and mental state equips you to do so...) Ask others to help call. The Chest Compression lesson most surprising of all: Remove all clothes from the person, including underclothes Yes, a bra or whatever conceals the center of the chest above the heart. No more offering mouth-to-mouth. Keep arms straight, intertwine fingers and push down hard and fast - at least two inches. At least 100 times a minute. Keep going until the professionals arrive. If the patient shows signs of life and starts breathing, turn him/her over on his side away from you.
Good luck is you are inebriated yourself when you come across this stricken soul.
Oh, and try to have some disposable gloves handy for the procedure.
Modern living is so very complicated.
IF READER HAS GOT THIS FAR, BEWARE A DELIBERATE SWITCH IN SUBJECT MATTER FOLLOWS.

Famed architect Rem Koolhaaas - a true urbanista (male division),in his perch called Office for Metropolitan Architecture, is as cool as they come. His latest definition posted of the countryside is 'anything that is not the city.' Trendy guy, yes? Seems he has caught up with the populist movement, for better and worse, how small-town America (try defining that one) made such  a difference in the last American election.

Consider another definition: The city is a place where public libraries post Behavior Rules - 10 pages in booklet form - as the DC public library did this past August.  DCPL feels the need to say that no bare feet or bare chests are allowed on the premises. Large bags in excess of 9/14/22 inches are not permitted. And prohibits 'odorous' patrons who annoy others from six feet or more away.

And then, and then: perhaps we are too often eager to draw lessons from the mix of people and backgrounds that get thrown together in a city. Today (apologies to participants), I had the son of New York cops over for Irish coffee with the emigrant wife of an entrepreneurial El Salvador  husband, sitting together and - in a way - comparing notes. Notes on how to make your way and sustain your goals in a chaotic indeterminate political scene. Patricia, smart and self-effacing, across from Sean,  talented garden expert. What decisions for each of them justify staying on in America? How else would either of them ever have met, since she is in Virginia and he makes a base in Maryland for clients in DC. Her husband's business has been suffering, she says (dump trucks); his choices narrowing by virtue of a deadline for health insurance application. How to move, what to do? Each with barriers in a way.She never would return home to El Salvator where gangs extract   protection money; he thinks moving to Ireland an option. The insecurity is frightening for both. Sean worries about health insurance in the future; Patricia, for the welfare of her grown children.
Posted by Urbanities at 8:14 AM No comments:

This column was supposed to be a piece about a city girl in country mode. Some high minded reactions about leaving an environment populated by some 500,000 souls and finding yourself in a village of  500 people where  roads are too narrow for  traffic. What happens mentally and emotionally with such a change.
Well, self-deception mostly. 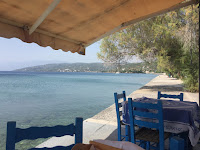 What some call vacation, others call escape away from and into other scenes. I chose Greece again for eight glorious September days in retreat from the usual  urban noise. The sun setting in the west over the Aegean from the terrace of the  Lagou Raxi Country Hotel on the Pelion Peninsula becomes  a revelation, an almost unnatural occurrence because of its too rare unobstructed views at home. Awe and wonder. Such  peace. I walk fifteen minutes into Lafkos village and sit in the central square beneath towering cypress trees - nature  overshadowing my minuscule self, putting my selfish wants in proportion. An elderly couple I meet along the way hand me an apple plucked fresh from their front yard orchard. And smile when I  thank them in fractured Greek. They reply as though I can understand their words. Except for delivery vehicles, the narrow streets are closed to traffic so the baker conveniently stacks the wood needed for his oven in giant piles outside. I pass Maria's taverna and see her seated in a cell phone trance beside a folded rack of aprons. These are souvenir gifts from patrons coming from foreign lands.
I walk 45 minutes down hill on an ancient stone path hundreds of years old and stop briefly to admire the view and drink from a spring blurting pure water from a rocky surface. I've come to Milina village to swim in the salty blue sea and walk  a shoreline lined with small shops and cafes. Signs advertise fishing trips and evening entertainment though clients must be limited this time of year. The tiny tourist office is closed. September is already 'off season.' I banter with the only  tourists I see, a couple seated next to my table where I order a raki. They are  Roumanians  pausing on their  drive south, wide-eyed toddler in tow. Their English is perfect.
So, too, is my swim off a pebbly beach shaded by some wispy pine trees next to a cement wall.
And so should be the  Greek salad I choose for a late lunch at another seaside cafe farther down the road. My waiter, the owner,  is curious, courteous, and direct - Greeks at their best, by right the equal of any man.
"I can tell you were once a beautiful woman," he volunteers, putting before me my plate of juicy well-oiled tomatoes and peppers alongside a loaf of fresh bread. I'm  taken aback,  unsure whether to feel flattered or insulted. What else can I do but thank him?
He walks away before I can reply.
City mouse, country mouse, still the same old face.
Posted by Urbanities at 7:53 AM No comments: