And be wise.... don't miss Folger Theatre's latest offering, the new stage adaptation of Jane Austen's novel 'Sense and Sensibility' - actually her first published book. The super-energetic production conceived by New York's Bedlam Theater plays through the end of October (2016). Furniture moves around on wheels. Actors play several roles, even sometimes within the same scene. Scenes of tears and joy. Madcap characters and misunderstood emotions. An entirely different take on British gentry you won't see anywhere else, the very opposite of 'Downton Abbey' and sure to influence future takes of other of her literary creations.
The connection between this most beloved author and Shakespeare  is not as far-fetched as you might imagine, though some 200 years separates the two.  Folger Shakespeare Library is celebrating them both with a comprehensive exhibit to honor Austen's 200th anniversary coming up in 2017. See: 'Will & Jane: Shakespeare, Austen, and the Cult of Celebrity' that will remain long after the Bedlam production has gone.
Some thoughts: The meaning of 'sensibility'  refers not to common sense but to the capacity for being sensitive. Two of the three sisters involved in the mating game represent  two quite opposite personalities characterized by those words.
Director Eric Tucker calls the play 'actor driven' for good reason. It's difficult to ever take your eyes off them.  And while the staging is modern in concept, settings and costumes are definitely  of the period (the book was published in 1811). Speaking to Folger supporters one evening, he pointed out ice advantage that theater of this kind offers in contrast to TV and film  - 'boundaries can be stretched and even broken.' Compelling stories remain the same, however: 'it's all about relationships and people, gossip and changing lives." 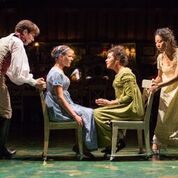 Notice! tiny little wheels on the legs of the chairs.

Posted by Urbanities at 9:10 AM No comments:

At Brixton's on U Street 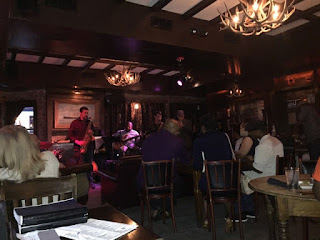 A Sunday night Jazz Jam on U Street  - no-cover scene on the second level Lodge Bar, musicians of all stripes playing in front of a  print of one of Cunard's greatest ships (I'll bet on the Queen Mary and its lively voyages of long ago) and, even more improbably, under antler lights in the high ceiling.

Audience members can sign up to play - amateur or professional. The atmosphere is as convivial as one would hope for (sometimes a little much so, among groups more prone to talking than listening.). The M.C. musician of the evening passes the red-fired glass carafe for tips. An older man in tie, cream white suit and  hat takes to the microphone to sing the blues  -  generations talking together.
Posted by Urbanities at 1:43 PM No comments:

Oh, woe, the latest study (see the New Yorker dated Aug. 25/16) suggests that major cities in the USA anyway have grown too expensive and are  losing their charm...becoming little more than high-priced country clubs for hgh incomers. That only people with already high salary levels are flocking to inner city domains - to work for the prestigious high-paying jobs such as info technology.
People who need jobs, the theory goes, are outclassed if they can't already afford to come. An odd assumption one might think, given that the tech sector especially seems to be graduating more potential employees than ever.
And another trend - retirees giving up suburban homes to become urbanites hoping to be closer to city services (transportation, delivery, health aids etc.) Are these only wealthy well-off retirees???
Rental property for mid or low income is at an all-time low. Anyone wishing to rent property, say a house, must deal with some complicated local licensing laws and red tape if they want to play by the rules.
Note The Washington Post article Sept. 4/16 titled 'The high cost of D.C.'s restrictive licensing.' How discouraging it can be for creative enterprising people to do 'try outs'  in the District: to get started is a nightmare trip through   legal land. (Note also the author works for the Chamber of Commerce, conventional opponent of government regulation). The usual excuse for excesses "to benefit community health," but I'll wager no study has been done to show the impact of such rules...and yes, there is a move afoot by two Republican members of the House (but not District Council members) to scale back  laws (such as requiring a barber to take nearly a full year's worth of training before earning a living legally, where an emergency medical technician  needs none).
Posted by Urbanities at 8:32 AM 1 comment:

The City of Light Loses One of its Stars

HOMAGE to Sonia Rykiel, who died August 25 in Paris, age 86.

Odd name, Rykiel. And an odd looking woman, Sonia Rykiel, with her orange-red hair exploding in straight lines around her  stark looking features. Why that white face? A statement for sure. She made a lot of  women feel capable of such individuality in less dramatic ways. I remember how, during several months’ stay in Paris in the late 1960s, I felt emboldened by her very initials- but more so by the clothes under her label sold in a little boutique on the Left Bank.
I remember buying two  long wool dresses, one black and the other a patterned brown number. that I could barely afford at the time when I was living in a tiny maid’s room  six floors up and freelancing for what was then the  International  Herald Tribune. Or if they weren’t her label, they might well have been since such styles went against the grain of excess current during a rebellious era.
When my somewhat-boyfriend at the time asked me on my return to New York what I had done during my time in the City of Light, I replied ‘I bought some clothes.’ He was the one-in-a-million who seemed to understand and not question my answer or think it frivolous. Because my purchases meant something more than additions to a wardrobe. They identified me with a time and a movement, still nascent, called feminism for lack of a better word. There were no marches or bra-burnings in those days on behalf of women’s rights, although there were riots aplenty among students in Paris, ship workers in Gdansk Poland and anti-Vietnam war protesters at home. It was up to every woman to distinguish herself by whatever lights she chose and not expect anyone to agree or offer support. 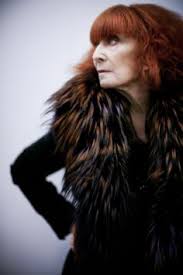 She made her name with colorful knitwear, some of it tight-fitting but meant for comfort as well as for show. The so-called poor boy sweater decorated whimsically with graphics and rhinestones wasn’t so much a political statement as a way of having fun with clothes and maybe even poking fun at them as well..
In this way, she gave women the right to be ‘bien dans sa peau,’ literally to be at home in one’s own skin. To be comfortable with oneself under any circumstances. That is a defiantly French phrase with ramifications going beyond the word ‘comfortable.’
I chose two loose simple easy-wear long-sleeved dresses of no particular surface distinction. At least not in terms of crazy let-it-all-out trends erupting in the world.  Except they were distinctive for being so well cut and dramatic in their very simplicity. I bought a long black flared wool coat to wear over them. These ensembles and a pair of black lace-up black boot shoes were all I needed to be and feel a la mode, to have made my own statement about my  own confident sense of self.
Sonia Rykiel wasn’t a bad role model, given her colorful personal life and range of talents. She married, divorced, raised two children, wrote novels (a clever one about the lives of a dress), built a business that began, according to the Washington Post obit, when she couldn’t find anything she liked to wear during pregnancy. Clothes for the mother-to-be then were  meant to hide a burgeoning shape that she felt ought to be celebrated not hidden. Granted, Coco Chanel had preceded her with ground-breaking easy-to-wear styles for women but that was another era, and Chanel’s styles grew into a brand that today only the very rich can afford. I like to think that Rykiel had her mind on integrating fashion into everyday life, as mirror of the life around her. “Fashion should be a kind of bouillon de culture,” she is quoted telling the New York Times in 1998. “To be modern is to be aware of what is going on.”

Posted by Urbanities at 8:32 AM No comments:

Ever wonder what the word urbanist means? In most dictionaries, the term applies to a person involved in city planning. A reasonable update, however, would assume it  embrace anyone who wholeheartedly embraces life in a city. A person who might  call him or herself an 'urbanite.' Who knows how to take advantage of the positives in any city and can argue its benefits.
Cities around the world are by and large swelling in population, putting huge demands on housing stock - little of which exists that is safe and affordable.  Then along comes entrepreneurial souls who are in business producing so-called micro-houses, self-sufficient apartment-like homes - maybe better call them cabins - little more than 300 feet square or less. Virtually trailers, with or without wheels, dressed up to appeal to buyers (renters?) willing to compromise on space for the sake of their sanity up against problems of space and income.
How far this trend will extend is anybody's guess but the market might include retirees downsizing (and wanting to live on a single level),  young ambulatory job seekers, even couples possibly 'trying out' life together before investing in full partnership or marriage.
Posted by Urbanities at 8:32 AM No comments: