April As Cruelest Month We (May) Ever Will Know 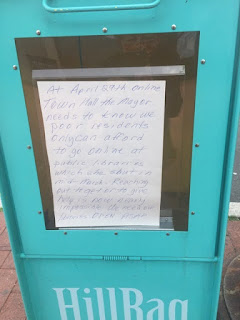 Let's be clear and remember when this hiding out thing started. Friday the 13th of March a friend reminds me. I was to be in New York that weekend but cancelled just before every event up there was cancelled. Then I was invited to a BSO concert at Strathmore.That, too, was cancelled. No one quite knew what was coming. Being 'hunkered down' had different meanings to different people.  I expect that one day my granddaughter, one of them, will ask me 'what was it like during the pandemic? What did you DO?' And I'll be able to tell her it was the world turned upside down, so a person had to roll with it. 'You could have dinner in the morning, breakfast at night. Drink bourbon with your ice cream. You could do nothing and not care.'
'But, granny' - I'm one of several she could call on - 'weren't you BORED? How did you stand wearing masks all the time?"
"Well, my child,  so many lemons made wonderful lemonade.  Imagine being able to watch a flower bloom. Wave at strangers and not be considered a moron. Read several books simultaneously and ignore Tv and the internet. It's difficult to explain how valuable time became, the looseness of it. When thinking thoughts could be considered a value on its own because the quiet, and lack of outside entertainment, made it possible.'

The photo below was taken on April 27, a long way into the  siege. It was taken on East Capitol Street only blocks from the U.S. Capitol Building. It speaks oceans about the very real divide that has grown up in the city where statistics are mounting.  How presumptuous to proclaim your goodheartedness on one of Washington's most 'respectable' and expensive avenues. Stately homes, for the most part, set off by front and rear gardens. Advertising the graciousness of citizens for sure. Noblesse oblige. Perhaps the big box stores are missing essentials like toilet paper but smaller outfits all have a supply. Brings to mind the conundrum of what constitutes civic action, empathy, social cohesion. Maybe offering a free bottle of wine might be more consequential and welcome. 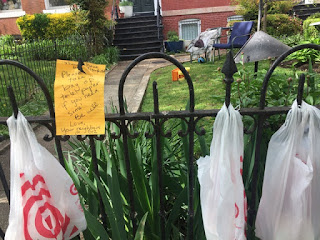 That's not to say good things aren't happening to a few people - the novelists, for instance. Anyone able to focus and hoping to have time enough to complete a project. And to some lucky retirees, such as myself, not bound by many rules beyond the civic ones now in charge: masking up and washing hands. At certain times I'm almost delirious with the sense of freedom extended beyond the norm - beyond reason, if reason is even left in the world we know today. Because I have almost a complete loss of the guilt and shame that comes with being financially well enough off in the so-called normal times - that I'm 'not doing enough with my life' beyond  guilt-erasing volunteer work. Leaving a legacy: that's off the table when simply holding onto life is required.

A question that might be pertinent in these times: What is one thing you considered essential to maintain your sanity? Fess up -  it isn't the feel-good malarky to stay calm, etc. I think better to refer to something quite physical - a notebook, in which you can keep track of the various options for food and entertainment/ clues to staying alive in heart and mind. So I found at my local hardware store (of all places) a little so-called Decomposition Book - recycled pages in a tiny bound notebook in which I can jot down appealing references to the world beyond my door. My neighbors last minute offer me a slice of pizza for dinner and I readily accept, glad to be given a clue to another site that delivers fresh food (this one makes tomato sauce on the premises).

The notebooks are piling up: dozens of suggestions daily for what to do, what to watch, how to move. I readily understand the psychology, at least my own. Writing things down promotes the idea a person is organized and so is the world outside, at the same time I am also creating a major disorder since when am I ever going to follow up, to make the time for the virtual as opposed to the real book in hand that I most certainly crave.

I consider buying a secondhand rowing machine, such are the admonitions to keep up the body at all costs. Tantalizing. Except the ad says that it is 100 pounds weight and slightly difficult to fold for storage. I'm not sure these are the times when we should be shopping for what is, really, nonessential items just because I'm not disciplined enough to do my Pilates exercises on the floor at home..

This segment (photos to follow later) is about the virtues and vices of walking the city while masked. At the very least, trying to stay six feet away from anything breathing whether or not the human being wears a mask. Surprisingly few people do whom I see taking the air in open spaces (as opposed to narrow sidewalks in the so-called inner city though my city is mainly a group of neighborhoods). Nor do all of them, not even most, move to one side when passing. The suggestion by the city's mayor is to do both these things but the rule is definitely do the mask inside public places. At our Eastern Market (a village and a neighborhood), nobody is allowed in without one though, alas, it was suddenly shut with 12 hours notice when a worker was found to have the virus. To be opened within 48 hours again after a thorough cleaning. Weekends are the worst time to be out; the teleworking employes are free to roam then. So aim for real distance - seek out areas of town that are not glamor spots, are hardly even know to exist. 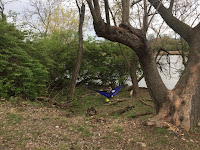 Then, surprise, see how much you have missed of what is going on in formerly not-so-hot spots: the high rise apartments/condos jutting skyward not far from homespun row houses with porches and tiny front yards. Paths barely trod along the still neglected Anacostia River on the DC side, past yacht and boat basins. No services here of course. No signs either. Past gates closed for the duration and then up against covered fences sealing off major construction projects, at least one of which was once said to have housing in low to middle income range but now delayed. Large swaths of the city in dispute over ownership and purpose. Formerly iconic buildings such as RFK Stadium now moldering. The protocol is tricky when maneuvering the lines. To nod, to wave, to speak - are we 'in it' together or are we separated by a piece of cloth over our lower faces? (Above left, a woman ignoring the world as she is told to do - by slinging a hammock between trees on an isolated part of city land: the Kingman island in the middle of the Anacostia River. Sublime quiet. An in-your-face statement, how a denizen possibly of a small apartment can shield herself from stay-at-home rules.)
Ignore everyone and concentrate on what is around and below you. Namely, the "please take me' items laid out for the picking. The 'Little Free Library' shelters jammed with books. A curbside square of grass filled with books (3 feet apart). I find three titles I probably never before thought I might want to read. An elderly couple well masked test the  wheelie file cabinet sitting out under a tree and decide to roll it home. They were out for the game, the hunt.
It takes some real imagination to come up with activities, especially around children. My neighbors (have I said this?) with their three active daughters are masters. They haul out hammers and wood and make things: maybe a modest tree platform. They find two dustpans and a tennis ball and play a form of pingpong or tennis standing up in the back yard. They work the yard - tending to greenery and maybe some vegetables.

The photo at the top of this page shows inequality at work: a hand printed sign taped to the front of a box outside a popular CVS near Eastern Market metro. Sadly, libraries are not on the list of essential services, likely because of the difficulty of separating people along the line of free computers but also the normal role of libraries servicing the community that practices an open for all policy.

Posted by Urbanities at 8:19 AM No comments: