Botanical Wonders at My Doorstep

The U.S Botanic Garden at the foot of Capitol Hill - improbable creation when you think about it  but more of its history later - can cheer a cold city person in an instant. Not only  immersion into a tropical (nearly fantastical) world of sights and smells but  of a host of lectures and exhibits to take a person's mind off wintry woes. The banana plant currently is showing off two multi=colored sinuous bloom at one entrance to the conservatory. A kindly docent not far away sits behind a desk in front of a cocoa tree explaining the varied uses of that plant's product with display items to touch and smell. Lo, the wonder: nuts from the shell of the bean that makes cocoa, soap and delicious chocolate. In a lecture hall at that moment a guest ethane-economic botanist from New York is giving a slide show about medical uses of tropical  herbs and plants - starting with the Sumerian age 2500 years ago when cannabis and opium were known. Then to the papyrus rushes of Egypt that became bandaids with the use of honey.  An hour's worth of exotic information, a trip on the screen to healers in Micronesia. The surprise of the day: kava taken in cupfuls by that area's natives does as well or better than valium. Who dares think modern medicine knows it all? 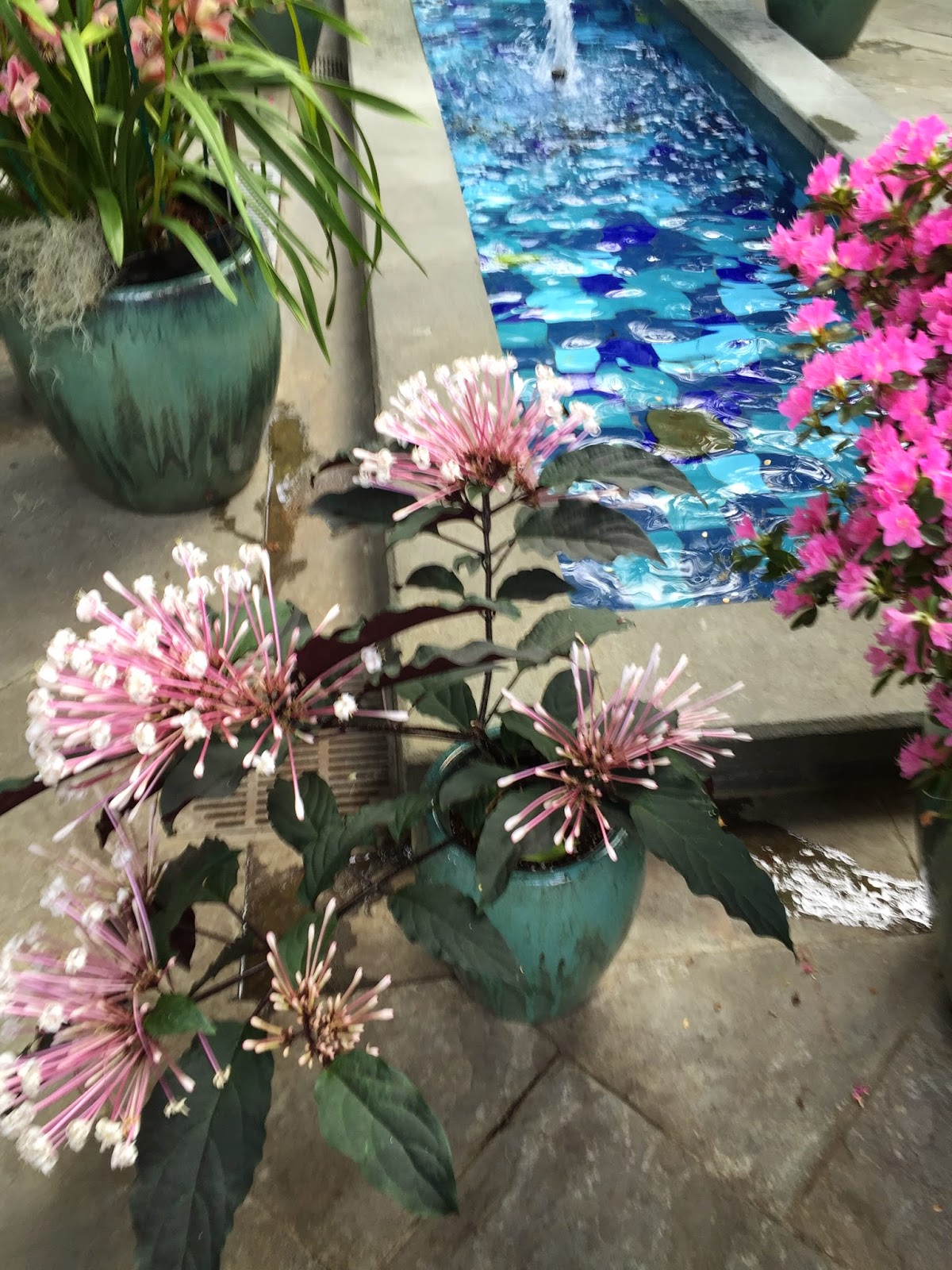 Posted by Urbanities at 1:06 PM No comments:

The third weekend of January in Miami this year was Art Deco Weekend coinciding neatly with Miami's year-long 100th anniversary, though it is difficult sometimes to relate the beach island with mainland Miami. Two different worlds, beyond which are other smaller worlds, such as 'Little Havana' where conversation must have been more heated than usual, given the latest  US-Cuba 'rapprochement.' Congregants on Miami Beach, where much of Ocean Drive was closed off to traffic on two days, were more interested in good times and good shopping, it would appear. See, Mamma, the acrobat on stilts, a Carmen Miranda lookalike throwing kisses into the crowd. Lincoln Road as usual awash in commercial offers, a slog of familiar brands along the palm-bedecked strip. The blessings of sunshine cover the shady side of life. 'Welcome to the capital of South America' ocean banners might have read in tribute to the investment offshore citizens have made in the city. One of Sunday afternoon's highlights: a bandstand erected just behind the dunes on park land, complete with bar and dance floor. A couple maneuvering with aplomb to the rhythms of the Robert Rodriguez jazz orchestra attired in sport shirts and dark shades against the waning afternoon sun. Folding chairs for audience members, among them a  comely lass in a bra of fake leaves and long shirt. Farther south on the beach a manicured park with a  newly-completed fishing pier  that has a stone sink with hose for cleaning the catch, such as it is. A man with a fishing pole on the channel side calling over to his wife some 50 yards away: their lines had caught in the water. A dog tethered to a post at the entry since NO dogs, etc., were allowed on the walkway. So goes a Sunday afternoon in Miami, languorous and deceiving. 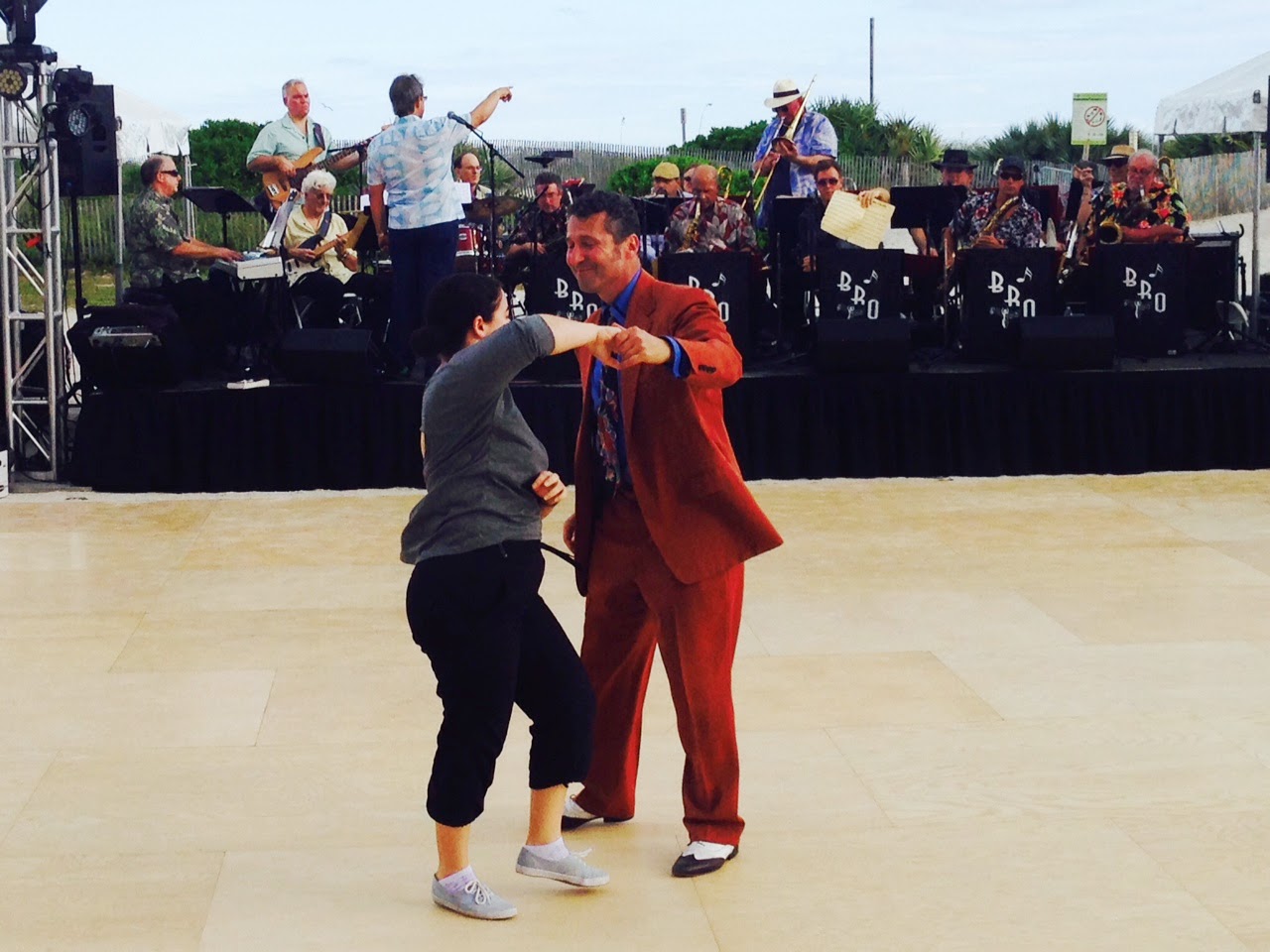 Posted by Urbanities at 1:48 PM No comments: 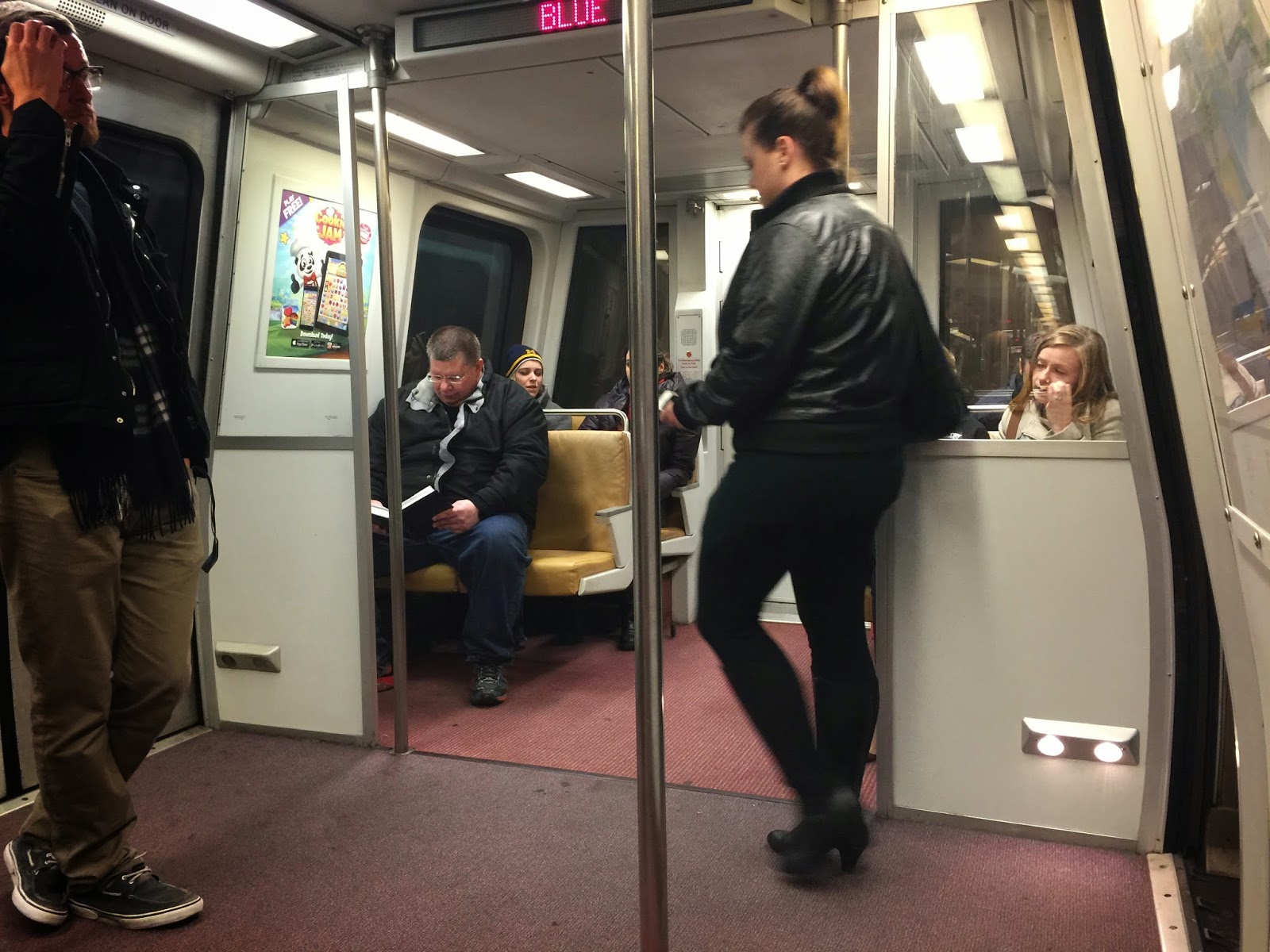 This is what is known as man spreading. The empty seat or half empty seat beside him might have welcomed the woman standing on the right, but in his present pose I don't suppose she would want to try invading his space.

Woman spreading also occurs on Washington's Metro: women too large to fit comfortably in one seat or women with too many packages who don't want to share.
Why harp on petty things when Metro management can't seem to get its signals (all kinds) straight. When riders must now wonder every time they board a train what mishap or worse might occur.
Regarding the smoke fatality: Didn't anyone think that inhalation in the cars might be dangerous and mandate emergency measures as soon as possible? Doesn't Metro want to own up as quickly as possible to its relations with the DC Fire Department who, in last reports, delayed evacuation due to poor coordination of information on whether 3d rail circuit turned off? Didn't someone (who?) need to tell firemen that another rail line was operating safely and to ignore it?
Where is Mayor Bowser in this? Why isn't she being more outspoken about the service problems of Metro? How many members of the Metro board ride trains or buses?

Posted by Urbanities at 7:05 AM No comments: