Woman On a Metro Train

The color, pattern and texture of a jacket  worn by a woman seated on the Metro train is similar to a garment I wore on my wedding day long ago.
I have a sudden shock of recognition and a memory still  clear about a peripatetic day in Athens when I spotted a long-sleeved top and long skirt designed with wonderful simplicity and appeal. A waffle weave, exquisitely made - possibly unique. Possibly silk.  Straight lines. Classic. Even tiny Chanel-like buttons down the front and a small shirt-style collar. No label name. It hung in a boutique on a side street in a fashionable part of town at a time when tourists were few. (The junta had just come into power.) I had no premonition of a ceremony; no groom in mind. But I knew then that having found the dress I would find the man. And so it happened..
I wore the dress once on a hot July day. No jewelry and no veil. I carried red roses from a bush on the lawn of the very great old house where assorted guests had gathered. The dress turned yellowish with age and ended its wearable life in a collection of wedding dresses being assembled by a costume curator at Vassar College who intends one day to display them, with a history of each dress attached. Stay tuned. 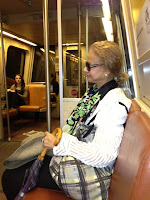 Posted by Urbanities at 2:49 PM No comments:

An accomplished urban man of distinction,  who likes to answer to the description of 'flaneur' (which Webster's translates miserably as 'an idle man about town'), can be easily engaged in a name game about cities he has known and loved. He fancies ranking them in terms of the 'it-ness' of the moment - their individual allure based on what might in other people's minds be simply subjective impressions from a recent visit. He appears very firm in his judgments and by no means volunteers them to gain effect. He has traveled the world, lived at separate times in a number of celebrated places, and feels justified in his conclusions.
Take heed then: Paris is 'over.' The city stifles creativity chiefly because government policies and regulations discourage innovation. The talented young especially are all going to London. He says a friend reports recently that the language she heard most often in London was French. Berlin has replaced Paris as a continental city worth inhabiting. More verve and excitement. Sydney has it in spades over Melbourne, the latter being "tired" and mainly a refuge for - well, he can't exactly say but it isn't really alive. Forget Rome, Lisbon, Madrid, Moscow, Tokyo - though he might give the latter some praise.
His own choice is New York - and the upper East Side of Manhattan, which has lost its allure for the luxe crowd  (Fifth Avenue and Park Avenue excluded). Rents are cheaper, live is easier since small service businesses still exist in the neighborhood. He can close his small apartment at any time and leave without regret for any wanderings he fancies. He is giving away most of his possessions and relying on digital devices to make his way. "Seven bus lines between New York and Washington," he exclaims - a lark for the last minute unencumbered traveler, even one on a day trip.
Posted by Urbanities at 2:38 PM No comments:

Posted by Urbanities at 8:03 AM No comments: