August in the Treasure State....

.......is unlike anywhere else, in my experience. I mean THIS August that came in with ))blistering heat and no thought of rain. The first sizable bit of water to fall since the last (skimpy) snow in late April poured down on August 2 in a reckless thunderstorm that dumped minimal wet stuff but could take out electricity in a  Western part of  town.

Town or city? Billings, of course, is 'the magic city' ( a motto of its own making, proof of which has yet to be revealed). Long live the imagination.

Where all heat records were broken  this year I'm told. Way high - 105.

Thankfully, I could dash out of rain into Golden Nails salon to meet with Jun for a full blown pedicure, all action and little fuss. Whereby I intrude upon public manners by asking 'the dirty question', as the good-humored proprietor called it: Are you vaccinated? He wore a mask ('have to,' he said - local law or custom, I assumed). In reply he said 'where are you from?' I said that was 'a dirty question.' Two women getting a manicure at his desk laughed, as did he.

I had sensed some hesitation as I entered - obviously a stranger but one who had thought to make an appointment ahead. A young man and woman plus the owner (I assumed) who, I found,  could also act as 'surgeon' correcting the troublesome feet of clients.

He answered with a chuckle and broad smile: "If you are from California, you have to wait longer."   California is understood to be the brazen outsiders coming to town exploiting the place. Or so I assume since by then I was in the massage chair, ready to be pampered without further talk. 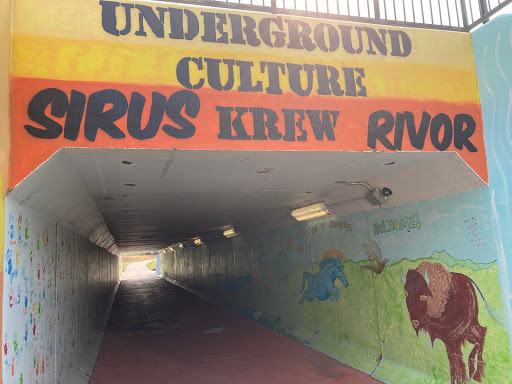 Walking along the Dude Rancher Motel ("Historic Site'), I see a sign on the front door that warns that no one with a local address will be allowed to rent a room. Thank you, etc. The reason must have to do with some criminal dealings of late, possibly buying and selling. but who knows? The coffee shop was closed. Nobody was around.

Auto licenses here come in 50 different designs - apparently the right of locals to pay extra for decorative adornment and colors on the required metal plate. "God's Country" is one of them. Horses and bulls.

Cruising along the Interstate between Missoula and Billings, through isolated farm country, we spy a lone man on a ski board being pulled through the water by a small motorboat. Shades of summer! Way out in nowhere is a long stretch of water of no special design or location. A water skier in the middle of a field...

Up up and away we move on and over the Continental Divide ('6393' feet it says, along with a mysterious sign warning that "all watercraft must be inspected before launching after crossing the Continental Divide). We are moving around and above what is purportedly 'The Richest Hill on Earth" (try proving that) which is Butte, which also claims to be  the"Largest Historic District in the Country."  It all depends on what you judge as historic and probably on how you measure. Few places, I'll wager, can brag of being ' a mile high and a mile deep.'

Why then, in the land of surprises, should it be a surprise to discover a business in a way-out industrial space that deals in "Seafoods of the World" - both fresh and frozen. Apologies are offered for not having fresh Maryland crab available: too costly says the clerk.

Now for a bright light surprise and tragedy of sorts.  Think 'Swanky Roots' and you might think - wrongly - of hair styling for men and women worried about what is happening on their head. To get swanky, you get color. Not so in this little conversation with an ongoing college freshman working behind the counter of a family-owned hydroponic vegetable farm way outside  Billings - yet not so far that it can't be reached for an all-too-wonderful collection of homegrown greens, etc. (Think zucchini, onions, herbs, etcccc as well). Sold in house but also downtown at a Farm Hub for those who pledge head. The place is sweltering on this August day but the retail shop at least has freezer and cold shelves. Bless the plastic covered greenhouses next door - and in the area where tanks of fish (yes,) whose excreta I am told help enhance the water that enchants the microbes that make the mighty vegetables, etc. grow.

Tours are offered but today is too hot to imagine one, and there are complications. Some teenage boys from a local high school not long ago broke in and ran off with the expensive ($500) register-safe holding the cash, which of course they took. They mangled and dumped the safe in a nearby field. Videos identified the culprits, who are known by all - locals being aware of a teenage coven of sorts causing havoc for fun (or for drugs?). Recently, this gang had put red flags on cars around town and then went back to break into the cars that had not taken away the flags. What sense is this?

A piquant experience: To be a relative stranger in a strange place and be able to introduce residents to some of their special attractions ('Swanky Roots" - who could believe it?)about which  they might never  have known. Or share with someone local the pleasures of some off-beat unfairly described ones, such as Zoo Montana, a combination zoo and arboretum. Plus, of course, an education all its own.

Town/city - which is which?  Maybe a town like Billings (pop. re 110,000 last census)  can only claim to be a city when the freight tracks  that run through the center of what passes for a 'downtown' are moved or bypassed to allow a free flow of traffic on north-south streets.

For a change of pace and presumptions: August 14-21 at the Chautauqua Institution, where the week's theme (one of nine topics chosen for this brave semi-open summer season) was the human brain.  Heavy subject indeed, lightened much by some of the scenes on the grounds.

A stuffed lion leans out of the library window facing the 'village green.'

And this more concrete image of a philosophy embraced by many who call themselves Chautauquans: 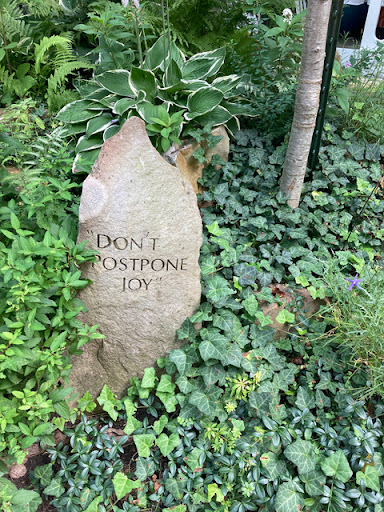 What does that mean, exactly? No explanation should be required in a community that purports to uphold a sort of declaration of universal human rights to examine life spiritually, physically, intellectually, etc.

Posted by Urbanities at 5:02 PM No comments: