Maybe the stigma has gone out of online dating, but what's the proof that it has gone from the idea, or image, of really older people (especially women) wanting dates?
It just seemed a lot easier in the olden days for women and men seeking a companionable relationships: families took care of such matters. Jane Austen famously outlined  stratagems at play in class-conscious  early 19th century England. The situation between the wars in early to mid 20th century America perhaps was different only in the relative lack of hypocrisy and deceit. A 91-year-old  widow recalls how, at the unfashionably single age of 28 as one of five daughters, four of them already married, found herself - thanks to parental maneuvering - in the company of a single man newly returned from service overseas. 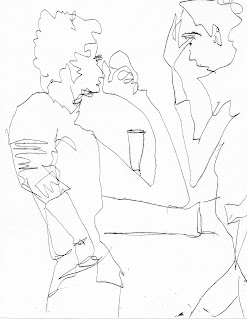 'So you are the sister who needs to get married," is how the returned soldier introduced himself to the eligible daughter. Needless to say, she wasn't very impressed  - not until he turned out to be a very able fourth hand at bridge. Marriage soon followed.

The nonagenarian recounted her story in the company of her 99-year-old friend, both now widows and members of the Washington Club, the first women's organization to be incorporated in the District of Columbia. (Men were 'accorded privileges' in 1979. The current 'clubhouse', on Dupont Circle, is the only intact example in D.C. of the work of Stanford White.)

Update to the early 21st century and matchmaking  in the digital era. A willowy Washington, D.C.,  'woman of a certain age'  (a recent 70 but looking 20 or more years younger) signs up with OK Cupid on the Internet, hoping to meet a compatible man but not necessarily anyone set on marriage. Like many self-sufficient  contemporary women, she cherishes her independence as well as her social skills. Now semi-retired and busy with a number of civic  organizations, she has been divorced and widowed and is, as the French say, "very much at ease in her own skin." But, taking precautions, she lists herself under a fake name and gives her age as 64, on grounds that few men ever want women older than 65.

A 67-year-old local lawyer responds, explaining that he was divorced "after a long marriage," is a Princeton grad "who used to be athletic," and is currently involved in filmmaking and his old college's Triangle Club productions. Though wary, she  agrees to meet for coffee. (Why does he stress his 'former' side? she wonders.)

He was nice enough though "paunchy and said he needed a hip and knee replacement, walked with a limp and was blind in one eye," she reports. Curiously, he seemed concerned  about he called "a cougar trend - older women wanting to go out with younger men." Upon learning of her arts background, he sends her a long email as a follow-up to their meeting. "It was all about him. What is it with these guys who never ask you about yourself ?" The email asked for advice about his unsuccessful film career to date and, only secondarily, said he hoped they would meet again.

No concrete offer was forthcoming so she dismisses his appeal in favor of broadening her scope. Her stepdaughter, who lives in New York, has a friend who is a professional matchmaker charing men a steep price for introductions "to very special women." She finds herself quickly paired in quick succession with an economist from Chicago who has a daughter living in DC, a  Manhattan-based French photographer, and a nonprofit executive living part of the year in Rome. The economist  puts a ten-minute limit on their initial phone calls but eventually concedes control, saying how much he enjoys their conversation. The photographer mistakenly misses their appointment time and place by calling her home phone rather than her cell, then claims that she "stood him up."

The executive, after several hours spent talking by email and phone, suggests she meet him in Rome but doesn't offer to pay part of her way. They compromise with an invitation from him to come to his country house in Rhode Island. A weekend by the New England shore can't be a complete waste, she tells herself, even one involving a long round-trip by train. He meets her on arrival and within minutes she realizes there is 'no spark' - no physical attraction, and probably no future for them as a couple. Over the next three days, he confesses that he has been married three times and is "feeling drift, moving sideways," unable to make commitments. "It's not you," he tells her as she is leaving.

A classic line that is so confusing because it is so often true.

Luckily, another OKCupid option suddenly is open to her - a New York real estate entrepreneur  who wants to meet "special women no younger than 50." The man claims to value experience and the wisdom that comes of age claiming that "anyone younger is apt to be spoiled."

By now she is becoming  hardened and  keeps going by insisting that she is as intrigued by the process, if not by the men. Yes, she says, she would be glad to see the latest possibility on her upcoming visit to the city. One of her favorite spots is the fountain at Lincoln Center where they agree to meet. She will be the short-haired brunette wearing red-rimmed glasses, she tells him.  He is  dark-haired, tall and thin, he replies.

They retreat to the cafe across the street and she senses at once they are "in sync," They find they have much in common; in addition, both are upbeat and energetic. They decide to take a long walk, during which he asks if she wouldn't mind coming with him to his apartment so he can drop off his briefcase. She dismisses what to some women seems an obvious ploy, preliminary to a sexual advance. "I knew by instinct that I could trust him."  Besides, she is curious to see how he lives and is becoming convinced they may have a future together. The well-appointed apartment confirms it: carefully chosen modern furnishings and art on the walls - her favorite surroundings.

"I can't believe what is happening to me," she tells herself. "I have been hit by a thunderbolt. It is an out of body experience." He seems to share her emotion. They have dinner and agree to spend the next day together. Before leaving the restaurant he kisses her lightly by way of goodnight. She hails a cab and immediately texts him: "Is it possible I have just kissed a man  whose last name I don't even know?"

He calls  the next day, ostensibly to make arrangements to meet. Instead, he is apologetic. He "can't go through with it," he says. He feels he has been tricked; he looked her up on the Internet and discovered that she is not the age she pretended to be. He can't trust a woman who would lie. He is sorry because she is smart, funny and sexy and they had got along so well. She naturally is  devastated and tries to explain, to make him see the reality - to understand why she did it: that most men never would call, much  look twice at, a woman who is 70 or older. Such women are perceived as washed-up, sexless. She desperately wants him to see her point of view, but he is adamant and insists that he needs a few weeks to sort out his feelings.

She never hears from him again but decides to correct her age on the OK Cupid site. Months go by. The only man who contacts her is the ex-boyfriend of a good friend of hers. He has recognized her photo  - she  uses a flirtatious pseudonym in place of her real name - and asks her out "for old times' sake." Over dinner, he asks her advice on how to attract women.

Several months later the Rome-based executive with the Rhode Island manse calls her out of the blue to ask her for dinner on his forthcoming trip to Washington. No explanation for the long silence. She acquiesces to the extent of agreeing to meet him for lunch - at her house, along with his Washington-based daughter. (Update: he gave her a kiss on the cheek upon leaving and asked her to tell him when she was next in New York. She felt nothing, she said, and hide from him her travel plans.)

In the interim, the 'friend' who had had a long relationship with one of her woman friends confesses he has "romantic feelings" towards her. They had been spending casual evenings together - outings to cultural events, etc. She claims she had no clue. Never mind his slightly awkward method of confession, it had the desired effect.

"I was apoplectic," she says. She doesn't say she was entirely surprised; nor does she reveal what are her true feelings about the man although in retrospect she will admit she once had thought 'how good it would be to meet a man like him.'

She tells him what are her doubts, relaying what she had heard about him from her friend. He gives his side and asks her to spend a week with him to celebrate his birthday in Mexico. She agrees to go knowing that first they would be spending most of the Christmas and New Year holidays together at various social occasions on the same platonic plateau. Still the plateau has shifted. Irony abounds. Online messaging has made possible a relationship after all.
Posted by Urbanities at 12:25 PM