What is most obscure in this photo may be the most significant. See one left foot  with silver toenail on a second floor balcony. Idyll idle illustrated: the tenor of the days when heat is abundant and time is a mirage. So what did you do mama during that terrible time called the pandemic, other than sit close to a dogwood tree and watch a neighbor across the way (which is across a small brick walk separating our houses) sort his laundry? Does it really matter - the 'doing' of anything?' I said. Taking life as it comes, learning to live up to those long-ago unreal and often unspoken goals: To read whatever I please, in whatever fashion. Never to complain again that I can't find the time...
And also time for reflection: how the past few months have influenced behavior, memory, ambition, friendships, etc. How much so-called social life do I really need? What is the nature of friendship anyway?  Is my incessant reading encouraging insights into these questions or merely deflecting answers?
My neighbor (pictured below), deep into his two-sided garden (a corner house), tells me about some of the odd behavior of casual onlookers passing by him deep into the ivy and flowers that make up his plot. There is no particular design involved, but, even so,  some people feel the need to vent an opinion. One woman went on a rampage and beat to death (with a stick or such) one lone plant near the waist-high fence where she was standing. My neighbor waited before making a move, deciding whether this was a 'mental case', which likely she was. Venting her frustrating on an innocent (possibly invasive) species, for god knows what reason. And  another woman suddenly began berating him for watering the garden at all. Given news about water crises everywhere (it seems), she challenged him to care for the planet. He wasn't disturbed: You may take a half-hour shower and never think about it, he reminded her. Which of us is guilty? Why did she feel the need to use him as an example of  how individual behavior can affect the universe? Her own guilty, her own frustration? 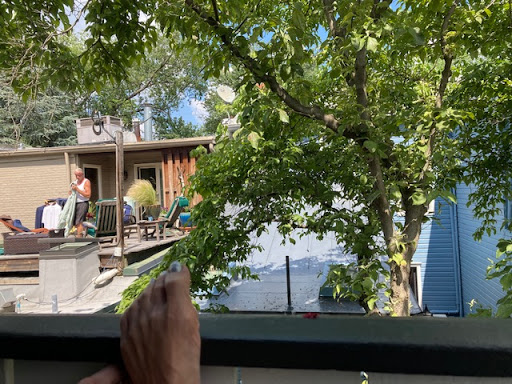 Yes, by all Covid counts, cases are dropping in the US while rising most places elsewhere. The transition period is a relative concept. I dare not think 'freedom'  - suspension of anxiety, worry, etc. - without remembering my state of mind many long months ago when the prospect of a vaccine- imminent injection - was possible. How it took some finagling to find time, place, date for that first one. Then  such was the subconscious insanity that I could pretend to know what I was doing when I was way off the rails in some way. I had imagined a place to go one January morning that was totally wrong. I set out on foot to a CVS only to discover I was due at a Safeway instead. In spite of having the name and address written down on paper in my hand. What happened in my mind that I didn't connect with reality that day?  And the nervousness: not being able to find the right place, not being able to get there on time, to be refused -that first shot. So I'm now very aware of my mental state, to understand it may be operating on two levels. I live in the present as a shield, having to be cognizant of alternate universes around me: people who may or may  not be  concerned with Covid, or fearful of vaccines, unwilling to hear other voices.

June, in theory, we are over the hump with more people than not going unmasked since more have now had one dose than not. Still, insecurities remain. I find myself still a captive of the New York Times Cooking pages - the visual appeal of the recipes excites the gustatory senses. Somehow the ability to print out any and all can be a substitute for not even trying most of them - it is easy escapism. To have 'digested' the ingredients and instructions becomes tantamount to a meal. And owning them allows me to discard them at will, as though I have had the experience of trying them. Such are the wayward habits of a somewhat sequestered life.

Not so sequestered that I can't extend my turtle head in pursuit of a USPS package that never arrived at its destination. Our folly and illusion to believe tracking every single thing through their service is possible. I have gone full into the strange recesses of this organization's ways of not quite admitting when something is 'lost.'  Does anybody out there have a similar experience?  Somehow I'm getting lost in the terrain, one district distribution center to the next and no answer to my query.

Keeping up by keeping going: Even such a simple appointment as a hair cut/color allows me some insight into the outside world. The trick is to exchange an everyday routine for an entirely different one - and stay aware of what the difference is about. Today (6/11) Walter told me he has seen people, clients, who never have left their rooms in the Westchester enclave in two years. Perhaps they have strayed into the corridor, come down for a haircut in the salon on the lobby floor - but not gone outside. Is that possible? Walter can tell me about dinner in an upscale Virginia restaurant with his wife - Argentinian, though he always orders salmon not the meat - and is charged $32 for a class of red wine. Why didn't he ask the price ahead of time? He doesn't say, only that now he has a story to tell - which may justify the price since he can't recall how good was the wine - probably only his wife tasted it -and that gives him satisfaction.  The client before me gives him homemade pumpkin bread; I give him $20 over and above his ridiculously low charge for the session. He wants stories, he admits; he is here to collect other people's experiences with no ulterior motive that I can see. He says he will one day open a house for older people to live together who might otherwise have to stay and burden their children. How sincere is he?  I can't trace his true allegiances. Peruvian and worldly, what does he call home?  A brother back in Peru he won't visit because of quarantine rules (four weeks at your own expense, entering and then what does the US want?). He can vent his ire at the price of the wine. He laughs exuberantly when I say that the charge took care of the linen tablecloth.

Tricky, entering a world semi-maskless. At my local Trader Joe's (masked as required), the checkout clerk remarks that my hair has a different shade today. Indeed, Walter has given me a trendy shade, he says: Red Wine, buy a German company Wells. (He also says the same chemical in that dye has probably given younger people cancer but the rot works more slowly in older ones... So should I assume safely?) How would she even remember me? "It was a brighter red before," she says - no notion of how she would know me at all, except that may not be the way the store tracks customers - by their obvious physical differences. We both are masked, and I am flustered. Does the store keep notes on customers? I'm stupefied, caught, not for the first time. 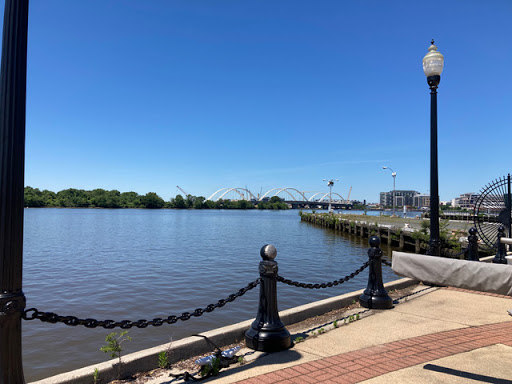 Washington on a sublime prime late June day with colors crisp and the air calm. A positive feel, just taking in the view from the Navy Yard leading to Yards Park (several romping grounds, with restaurants, grass, etc.) bordered above by the Anacostia  straddled by the new about-to-be-finished Frederick Douglass bridge. Elegant arches are consoling in some way.

Posted by Urbanities at 3:31 PM