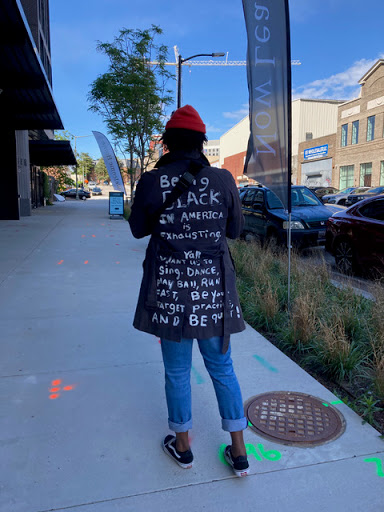 The 'whatever' month. Transition. Ambivalence. The third month into what these days counts as freedom, of a sort. Freedom from a virus attack in virulent form.   It's still a time to count  pleasure from small things: observations during a walk, success at putting a recipe together out of unlikely ingredients (as recommended on the NYTimes food page). The larger things (pleasures) come from enjoying food together with friends in a restaurant. Uncertainty certainly applies to questions about travel overseas this summer.

Walking about: I noticed a sky blue MiniCooper with orange trim and, for some reason, it lifted my spirits. Especially as it was parked in front of a house painted with no fewer than six colors. This was on an ordinary Capitol Hill street on an ordinary spring day that was a mix of sun and clouds. I walked on through a large open space - park and playground combined - watching very young children cavorting under the casual eye of grownups and felt happy for their innocence. So much of the world is distraught these days,  and not because pandemic vaccine delivery is slowing as seemingly more people refuse it.

Another day, another glance at some minor rebellion - white paint Black Lives Matter slogan on the back of a black leather-like coat worn by a fellow hung up on his cell phone. The everyday scene at Union Market is a place apart, defiantly its own space with crowds and traffic fighting stubborn pedestrians. A distillery next to a secondhand goods store next to a downmarket emporium of Chinese imports.  At the top of the hill (incline, rather) a movie theater is open to a few stalwart patrons. It is late afternoon on too good a day to spend inside yet there we were - all seven of us. The owner/manager thanked us for coming, saying they had opened only recently) before he started the projector (or whatever digital operation is involved).

Definitely, a new mood, a sense of hope. At Eastern Market today - a fair-weather low humidity Saturday - a young man put two buckets upside down outside an alley  and floated two yellow smiley-face  balloons  to draw attention to himself while he stood between them singing an operatic aria, complete with face and hand expressions. He was instant entertainment in hopes of attracting a few tips.  All this while passersby wandered along the car-free street with dogs and children past restaurants setting up tables - distancing observed - on the sidewalk Cheerful overall, no catch.

Talk centers on mood mainly.  How to relate, how to know. Everyone has his/her own way of feeling 'normal.' It struck me today, during the third week of May, how we might each cling to a single action establishing a 'new phase.' What choices!  Going to a restaurant and eating indoors. Buying new clothes for a wardrobe that might never be needed. The act is what counts since who knows the reality of the future?

Posted by Urbanities at 3:21 PM