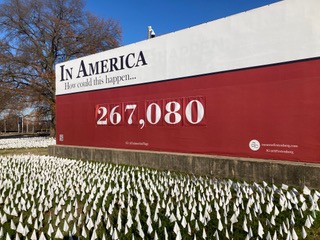 Though why a body celebrates the onset of cold and dark defeats me. The first day  of the new month was the first in nearly nine months when I wore  a coat, gloves and a hat. and truly the brisk cool wind was refreshing, especially with encouraging vaccine news erupting almost daily. But a sad day, too, since it was the next to last one when the public could see anything left of the memorial to  the country's 240,000-plus  Covid-19 victims honored by a display of white flags, many of them personal remembrances in writing. conceived as a national place of mourning, a Maryland artist somehow managed to  put together a team plus funding to take over the Armory Parade Grounds opposite DC's old baseball stadium.  The title - America: How could this happen..."- is self-explanatory since it was also a day that saw record number of deaths in one day and hospitalizations from Covid.

From one day to the next: a total lack of continuity on one's schedule. From working outside among other volunteers helping to take down the flags to very closeup intimate relationship with the dental hygienist and periodontist whom I suspect are weary of hearing patient's existential and physical woes. Still, the experience is special during such a time - to be in small rooms that are as antiseptic and germ-free that is humanly possible, given the work that goes on. One doctor wore what looked like a motorcycle helmet as she bent over one reclining figure with only inches to spare.

The cold and wind has a friend in the masks we wear unsparingly. It could also be true that body language was never more readily in sight. Smiles are excluded, which sometimes makes people inhibited about using sound as well.  To pass someone on the street with friendly intentions: exaggerate with arms a stage bow or offer a sweeping gesture as if to give him/her priority on the pavement. Or even speak: a short phrase that will represent connection of one human to another. 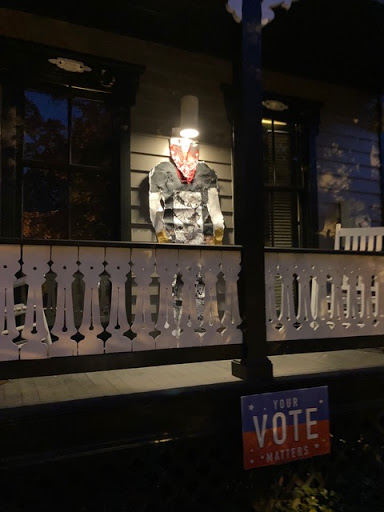 On the 7th day that is also one month from my January birthday - to a number not ever realized as possible to the young - I plotted to get a Covid test, somehow. My motive was to clear up whether I could be asymptomatic, that having been in the company of a new Covid 'victim' when she seemed healthy, that I might learn something. That I could consider a severe quarantine until the time came for another test. This is confusing as are most 'facts' about the pandemic progress. A test one day may mean nothing until the next test. By the time results are in, a person could be newly infected. But the civic push is on in a big way .Hence, I felt compelled to look at various options - different ones, different requirements. My PCP (personal care physician) is affiliated with Medstar so the urgent care around the corner would make sense. Sign up no problem on line (required) BUT the next spot open for a visit was six days away. Would results be faster than the DC program offering testing at a scattering of sights?
However, the city's free testing sites (Medstar takes my Medicare care) do not require insurance, but do ask to sign online ahead of time. Long hours later I came up with quagmire: the online form did not accept that I have no 'group ID' number to process my application.  No explanation offered. Should i phone the city to ask why and would I hear back? No, I would not, I would instead go to the local Firehouse 8 on C St. SE Tuesday at 2:30 (now December 8) at the stated time. I would line up, plead my confusion about why I had no name in their online records, hope for the best. (Last time I was tested I never got results after two weeks and had to lean on my PCP to do after the lab, to learn, finally, 'no sign of virus.')
There was a line of people mostly in black cold-weather clothes half a block long, like a trail or series of railway cars. Patiently waiting while the crew (who were just putting on their PPE) took their place. A white tent, a woman seated at the table, and several 'guides' - firehouse personnel or whatever - and iPads to secure that I could be seen. But only as someone who stated' no insurance'  because I had no registered  insurance claim via the online signup portal.
I protested, but a lie it would be as the kind attendant-guide took down my info and was jovial in approach. Seeing my age  on the screen, "wow, you must know a lot,' - all those years of living.
I was touched. A Human Moment? Had he practiced this line?  And what of the fact that earlier in the day sitting with a 'family-like friend' we had gone over moments in life when past and present combine: her realizing how and when she met the author of a book she was about to read, and how much details mattered then. The pleasure of remembrance.
For me, a jolly moment on a sunny windy day. The man in the tent took my little plastic bag of tricks, poked the wooden stick up my two nostrils, for maybe 30 seconds, laughed along with my attempts to talk.'Why no chairs here?" I wondered. "Who is analyzing the results? LabCorp?" We stood on muddy ground, the oldest person in sight I would guess, followed by youngest - a mother with a young daughter. And was sent along my way with a piece of paper saying I would get results between three and five business days. But nothing about why it mattered, how bizarre our situation that means I will have to return to get another test to allow another quarantine, etc. on, and on...
Later on a quick note, after reading that most Americans these months have looked at an average per person of 10,000 hours of TV movies and such. I calculate that I have struggled to see one segment of an impressive three part Steve McQueen special about Caribbean emigres in London's Notting Hill, and that I've seen very little promotional material of any kind. Spared the hustle  although I can't say I've saved my eyes (who knows damages from the screens around us?) since I've managed instead to consume an average at least one book a week or more.
Posted by Urbanities at 3:06 PM