Easy Times in The Big Easy

Also known as Crescent City, NOLA,  but NOT the capital of Sportsman's Paradise as license plates dub the state (Louisiana)..
And what a city it is, especially  between seasons, as I and my friends found it the second long weekend of January, starting on the 6th - officially the first night (Twelfth Night, Epiphany, if you follow church calendars) and first parade of Mardi Gras with a casual ambulatory march honoring Joan of Arc, New Orleans' patron saint (she liberated the citizens of Orleans, France, from the British in the 1400s) , that included bagpipers in Scottish dress, great numbers of costumed folk heroes (cardboard, foil, fanciful touches of all kinds), horses with knights aboard, and  even angels fluttering their wings. Brassy and solemn at the same time. Spontaneity on every side of the evening procession witnessed by residents and tourists in equal number. This was  a legitimate 'crewe' or Krewe as the traditional celebratory groups or clubs are known. Mardi Gras itself is Feb. 5-9, with Fat Tuesday the last of Carnival before the first day of Lent on Ash Wednesday.
Famous if seemingly unlikely folk of all sorts put down roots in past days, including the French  painter Edgar Degas who lived  here in 1872 visiting the American branch of his family for five months at a key time in the city's cultural history. And British architect  Benjamin Latrobe,  (designer of the U.S. Capitol among other significant American buildings) who ended his life here, a victim of yellow fever in 1820
How to resist a city where a  funky restaurant with the odd name of Jacques-Imo advertises itself in neon as having "Warm Beer Lousy Food Poor Service." Not yet on the wholly Discovered list except to locals and friends. Paintings on the ceiling, Watermelon mojitos. duck breast with - what else? - pecans and mushrooms. Louisiana has plenty of all these.
The high point for visitors is being identified as  locals. Our party of four sat in Mr. B's bistro on Royal St. drinking our wine and Sazerac (rye whiskey, absinthe, bitters and an orange peel, no ice) when two women interrupted to comment  with words to the effect "oh you all must be natives." Because we were, if nothing else, wholly engaged in the ambiance and they were a pair of visiting physicists from the state of Washington, coming to town for a convention.
In NOLA, it's easy to pass for legitimate, since the mix of insiders and outsiders is  throughly blended. And make note too: the streetcars work - oldest continually operating trolleys in the world, going back to the early 1900s. 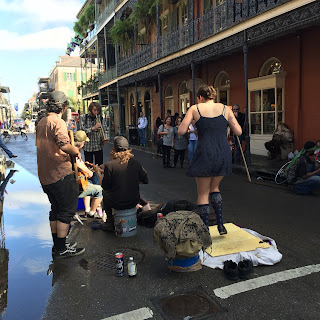 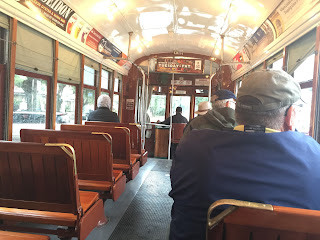 Posted by Urbanities at 3:24 PM