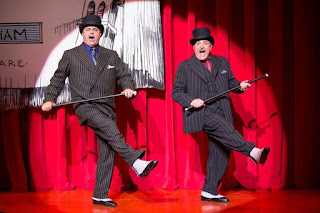 Unusual taste for  a man born on an Indiana farm. His talent showed early and later garnered him  enormous success and admiration across the board for a sophisticate who knew how to entertain the masses with such jazzy tunes as those in 'Kiss Me Kate' now playing at Shakespeare Theatre Company's Harman Hall. The production is loud and brassy -  starting with the opening sequence (the familiar "Another Op'Nin, Another Show") on a Baltimore backstage. (More city references follow: Padua, Mantua, Verona, etc., introduced in the show-within-a-show.)  What the revival lacks in subtlety, it makes up in a joyful display of acting and dancing talent. This is a show for a new generation hooked on instant feedback and sound bites, aiming for the solar plexus rather than the brain. Musical numbers come and go with crackerjack timing and breathtaking gymnastics. the www.shakespearetheatre.com
Posted by Urbanities at 8:12 AM