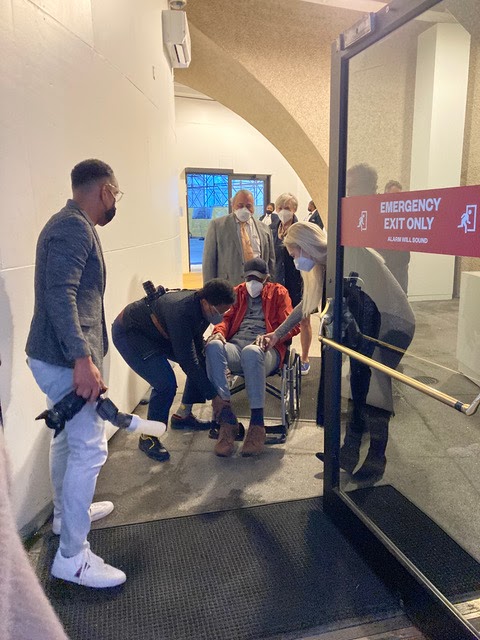 Note: May 25 marks the opening day of an exhibit by Washington's own Sam Gilliam at the Smithsonian's Hirshhorn,  shown above  arriving at a reception held the day before in his honor. He is 88 and still working. The show, entitled "Full Circle," is a collection of his latest  creations, what he calls tondos,  done within the last two years - his first solo show at the museum. It's coupled with a conventional wall-size painting called 'Rail' from 1977. The latest collection is well-named,  as though to imitate the building's own circular shape. The dense brilliantly colored panels inside the  round beveled edge frames reflect  similar pioneering abstract work he did in the 1960s.
The sun will shine, the world will recoup. Anything can happen to the mind in good weather..

Even so, I keep returning to the compulsion for reading, even sometimes, trying recipes put out by the New York Times on what seems a daily basis. A complete escape and total immersion in the contemplation of sensuous living. After many attempts and failures, I still can't resist trying again. Which may be the point. Trying yet another involved dish meant for 4 or 6 when I'm only one not very often a very hungry soul.  Because I know I will lose does not seem to phase me. And I also know that, in the right mood, I'm an able cook using nothing but spontaneity with a few less ingredients.

The immediate above photo is reason for cheer - leftover from the April notes.

Whenever there is an upper, there comes a downer. Abortion, not reform or building up the infrastructure, now takes center stage in the US political scene. And lack of trust and faith abounds in lesser ways. Each of two trips on Metro today I saw random customers - young and middle-aged - opening gates or leaping over entry gates without paying, with nary a shameful face in sight. I asked the attendant in the booth why he didn't at least try to stop them, even try calling them out.

What can you do? he replied. Everyone does what they want. The system is broken.

To try for another upbeat note.

Onto people with faith of another kind and what they do about it - and I do mean faith literally.

Matt Blakeslee, for instance, was a pastor in the large evangelical  Faith Chapel in Billings Mt., for almost ten years. The 39-year-old entrepreneurial-minded  man had gone to a local Bible College and felt a call to service. But eventually the call wasn't enough. "I felt I wasn't fulfilling myself," he confesses. As pastor of a super-large congregation, calls seldom were on his own behalf. It's the nature of the job.

He quit the day job and didn't earn any salary for the next three years in order to start a nonprofit in downtown Billings, Mt.,  to breathe life into an old Art Deco movie theater  and create on an adjacent street a fine arts venue for 'independent' feature films. He did it almost from scratch. What made it possible, he insists, is the helpmate at his side, his physician's assistant wife with a steady job. He started with a  rundown building that was a former car dealership and bowling alley that grew into a single screening room coupled with a bar.

ArtHouse Cinema emerged as the center of a coterie of fans who relished the communal aspect of movie-going. (Similar, I suspect, to why large religious congregations bond.) It's an ongoing effort ,though at present he keeps a staff od 9 with   plenty of fund-raising mechanisms in place. He controls what is shown is on the very much larger and more dramatic Babock Theater screen around the corner with its shiny and flamboyant marquee. A different program entirely  is offered weekly at ArtHouse venue, that is also the site of film seminars and - usefully enough - because of the bar , conversations over 'a glass,' as the Irish might say,. Grand plans are afoot for two and three more theater spaces to provide more flexibility and exposure. He and his wife bought their own house in the midst of life's changes way back in 2008, for a low six-figure that now has ballooned in price three times.  Similarly, he hopes to see live theater-going expand in the properties he now owns or manages.

It takes strong vision and persistence but the call has been returned from a community that believes in the cause. 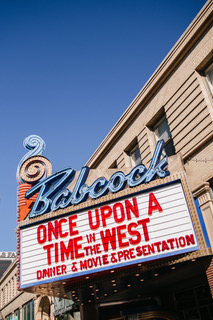 flamboyant 1907movie theater, one of which is still alive and in  the continuing process of renovation thanks to the vision of Billings' Matt Blakeslee and his loyal supporters in a town with a population of 109,000 people.