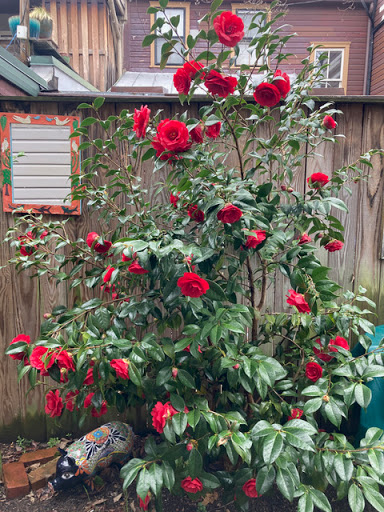 Coming out of our shell? Well, sort of. Two shots delivered (Moderna) in February two weeks apart, meant waiting two weeks of March to begin to 'feel different.' Sort of. Physically, little changes, though pandemic anxiety is difficult to shake. Sleep is erratic. Public behavior is like playacting. Masks feel eternal - and necessary. Emotionally,  relief of course, A lack of fear and trepidation. Lunching with two friends who are also past the danger zone, or supposedly so, when chance of a life threatening disease is diminished.

What's so maddening in the wake of this new phase of life (in which life seems altogether possible, without danger of a virus claiming my own) is the advent of pollen and then the cicada hurricane...I'm left with sniffling and coughing and  sneezing, wondering if the scourge will ever end. Both scourges, not to be compared. Pollen-nated while vaccinated.

I"m one of the lucky ones, now today (already officially spring) among a very small minority of those who have' crossed the line'. There is a guilt connected to the sense of freedom, partly compensated by the idea of celebration. What helps, too, is the promise of a great profusion of flowers everywhere, alongside budding trees, the ecstatic delight of  color and sun. Plants and flowers engender tremendous emotional support accompanying the medical boost.

Though what to do or say to people refusing to follow CDC 'orders' - who say absolutely no vaccine for them. The strong-minded mother of two young twins declaring she never has been sick, never had the flu, never needed protection and so won't start now. Will she at least allow her children to help protect others from Covid and take a jab when that age group is highlighted. So much still is unknown about the secret carriers - children as well as adults.

A 52-year-old Black man says he refuses the option because he believes  the vaccine is 'unnatural' - does not come from nature. He cannot be convinced that the virus itself is a biological mishap arising out of an animal's contact with humans. No, he must insist on a paranoid version - that the virus was created in a lab  whether by accident - still unknown - or design. The tall thin man has become fixated on what he calls a natural diet - fruit and vegetables only, little or no meat - and thinks will keep him safe. He works outside as a handyman while wearing mask, has a phone (so aware of the world, at least minimally) but no checking account. He obviously does not feel responsible in any way for fellow human beings; his conscience relates only to the wellbeing of his own body.

PS The pig wants into the game, too.

Posted by Urbanities at 7:32 AM