Getting Out of Dodge

That is to say - leaving Washington for the first time after five months of semi-isolation and coming to Billingsville, Mt.
Which is  inventing a name for a much smaller town in a much larger jurisdiction - a different place and a different pace. Urban worlds, both, though the contrast could not be greater. The trip alone - an airplane ride mostly frowned upon by the country's most often quoted Covid experts -  was a testing exercise in many ways. A way to deceive oneself into feeling somewhat normal again.
That included conversation that wasn't about the restrictions of the virus or even in short spells talk of the pandemic itself.

Instead, luckily, I was surrounded briefly by two entrepreneurial artists living by their own lights in Montana's largest city, while maintaining connections to political currents of the day.  Below, Shane deLeon and work created following Black Lives Matter celebrants. The small  art gallery was created by another couple, both artists, at the time they were converting  a former commercial space into a two-story  loft-style home. 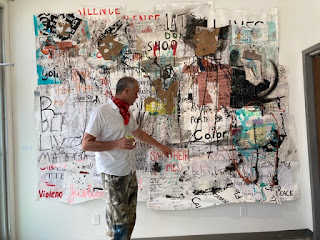 Which goes to show that there is an alternate reality in a town-city ('ville' originally meant farm, then village, in French) whose economy is basically banks and refineries. A village city without a central focus with suburbs stretching forever west.
Posted by Urbanities at 1:10 PM