May is Maybe month


Hard to believe and hard to know much about anything these days. Already May 1 and so little is known about our future with the virus. We celebrate living one more day and try to remain content with a philosophical out look - those of us, surely a minority, who have relatively stable lives. This being a Friday, it is when a new tradition has begun in my neighborhood - Ward 6, which is greater Capitol Hill in DC - instigated by DC Council  member Charles Allen to step out on porches and stoops at 5 p.m. for a Happy Hour alone together. I intend to mix ahead a cool concoction and sit out on the rocking chair on my front porch, hoping to catch the eye and maybe voice of some neighbors on my block. As it happens, I seem to be the only home owner with a covered porch that makes the gesture a natural one. Out West, in several Montana towns, I'm told the ritual on many evenings is for entire neighborhoods to step outside and bellow on behalf of the health and care workers doing the toughest work imaginable during pandemic days.

Most days, though best in good weather,  I'll often take a chance on catching the attention of passersby on the pavement outside my house -  dogs and children in two, forward and  back. Most of them are head and footless bodies, cut off by the porch beyond my two front windows. People go by like waves - sporadic, unspoken. I wave through the window on the chance of achieving some meaningful contact.  A smile on an unmasked face, my own or that of strangers. Masked walkers seldom are alert to the scene around them, being tuned in to their phones or to steps ahead. That isn't the case with my immediate neighbors who exchange greetings outside their small yards across the street, at the end of the telecommuting day, with babes in arms before the dinner hour.  The variety of families and friendly faces is welcoming, almost inspiring.  Gay, married, Latino, black - an exceptional medley from ages 9 months to probably 69 years or more. Hope for all of us.

More hope: On a short walk stretching my legs, I spy a printed sign taped to a fence along a commercial corridor.'Rock concert Saturday night 6:30 until?,' it says, giving an address just a few blocks away from mine. What could be better? I mask up and show up just after the hour to find  others, masked and unmasked, dogs and children, scattered on an entire street shut off with orange cones on either end. Three young musicians - two guitars and a drum set - are tuning up with microphones on what is usually a small parking space next to the home of the District's mostly non-voting Congressional Rep. Eleanor Holmes Norton. And lo, behold Ms. Norton herself sits on a stone bench - unmasked for the moment - drinking red wine (or so it is reported to me) out of a white cup. She is smiling. A tall bearded home repair man has hauled a stuffed armchair to one side of the 'stage', beer in hand. He springs up in welcome and we do a little jig together; his partner, who stands apart, says the woman drummer is all of 16 years old and a famous tomboy/girl in the 'hood. This scene has been going on for several Saturdays weather permitting, spontaneously generated: a welcome treat.

Walking is exercise but also an experiment in observation. 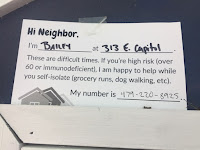 Look down and there is a small sign under your feet - ode to the public passing by. Look up and see a toy bear waving from behind the window of any number of houses.  Pass by the Little Free Library boxes and help yourself to leftovers - useful gifts for little people perhaps.
'Maybe' month is turning into a forever question regarding free locomotion. It's tempting to think forced slowdown encourages more patience. And in spite of freeway speed drivers,  a certain courtesy seems to take hold on city pavements between  car and pedestrian. 'You go,'I wave and 'No you go' is the return, masks and 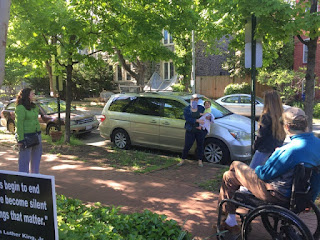 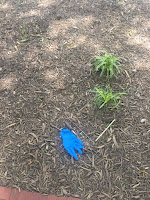 all. Maybe the mask IS the thing - marking the wearer's courtesy to help protect the public. Alas, on this 13th day of the month, anniversary of the March day that shutdowns began, I still seem not to be able to write legibly by hand. That is likely due to a subliminal anxiety that rules the days. I try carefully to print words - slower but surer - a reminder perhaps that life really is better live at a less hectic pace. Whatever good will come of the pandemic period? What is the natural reflex in human behavior when stress suddenly becomes less? That question has only begun to be debated.

At least signs of real spring have returned. My goal today is to iron a sun-dried duvet cover for my bed. Such are life's little accomplishments.

I'm pondering while I smooth away wrinkles (on the cover) why it is we feel (I feel anyway) a greater sense of aging these days. Do our dreams at night steal away  energy? My body aches. Not having regular pIlates sessions obviously hurts. I can't really improve bodily function without those damn machines! Living with no sense of the future drains a person I suppose. Quite a surreal movie could be made of a person's nightly encounters during this period. 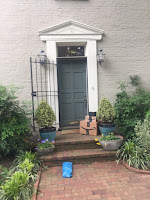 Streets in my DC neighborhood are emptying out, to judge by relatively few parked cars and increasing number of free spaces. New York's more fortunate have gone north to the Hudson River Valley, Berkshires, Florida. Only one apartment on each floor is occupied in her building, reports a friend packing up for a drive to her place by a lake in Massachusetts. "At least there I can kayak," she says.  Washington has the Chesapeake and the Eastern Shore.

Handwritten call to action found on a walk along the National Mall on 5/20/20. Practical suggestion for the times. 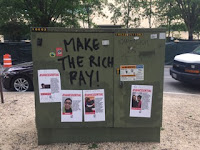 Such a walk definitely increases a person's powers of observation, and awareness of  contrasts everywhere: plants and flowers in profusion - living, growing things - against shuttered buildings that normally would offer feasts the imagination for visitors (entering freely, without charge).  How this sits heavily on the mind while the feet are steadfastly moving  forward in rhythm as though to defy the elements  that threaten our everyday existence. How it is that I can read the New York Times and learn simple exercises to relieve  muscular body pressures caused by confinement (chiefly while working on screens). The  pages reveal a world in upheaval, the unraveling of societies, stalemated government actions up against the  mundane.
Meanwhile, the city's mayor muses (teases?) about reopening steps - saying on one day that the 'advisory committee' has determined what they should be without saying when they would happen.  The holiday weekend was full of people out of doors, half masked...

Posted by Urbanities at 9:13 AM