Step Afrika came to Apple's most recent Washington area campus on Sunday February 16, for the first time,  offering free their high energy percussive art form that is unique in this country.
The appearance of eight black African-American dancers stomping and slapping  under the renovated Carnegie LIbrary's hard white floors  drew crowds, as expected, and  were in turn given a short history of the tradition and background going back to the 18th century when drums - the African drums - were outlawed.  Performers turned to their own body for expression, using all appendages  and rhythms to create a wholly original means of communication. Stories are told without words . The ensemble of  highly trained, regimented dancers are all college graduates (arts and science) cementing  a history that began with competition between in the sororities and fraternities of traditionally black universities and colleges. To see is to believe....the compulsive creation of community Now in its 25th year, the company is based most of the year on H St. NE in the Atlas Theatre.  Give it up to their infectious movement, and their slogan 'We are better when we step together," between pyrotechnical  seemingly inhuman feats of motion by individual members..
So why an Apple store, of all places? 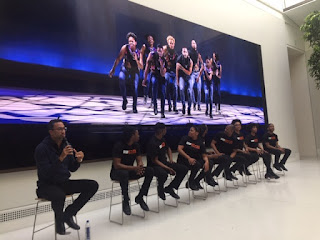 The company says it is celebrating Black History month by offering this and similar programs, hoping to attract a wider audience than might usually be found in that austere white building in the middle of a green park. Apparently it worked. Onlookers were stretched over the atrium on upstairs balconies. Small children were captivated on the ground floor. The upbeat, solid steps of these highly disciplined irrepressible  eight performers -- all different in physical styles - were contagious in their call outs (giving instructions to the audience on when to participate) and facial expressions. The lesson to children in the crowd: keep moving! But it wasn't lost either on a feisty woman with purple hair named Heather raising her hand during the Q&A to request "do something for seniors." In other words, think of offering classes (which the company does when they aren't traveling) for an older generation as well.
You go, girl!
Posted by Urbanities at 3:33 PM