Without a doubt, 'Open Dimension' best describes the spirit - and latest exhibit - of the Smithsonian's Hirshhorn Museum. 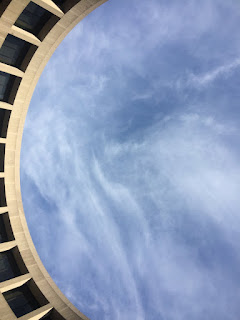 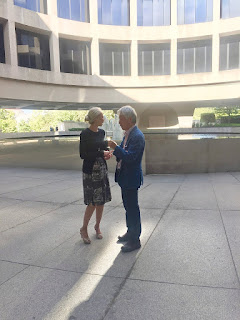 Unusual among the many attractions on the Mall, this rotund building, which opens out into a sculpture garden,  is offering free public programs and sketching sessions on two more early October evenings in and around the 4.3 acre open air plaza. Drinks and tasty bites are also available. Such enticements are in line with the installation of ten stone and steel sculptures by Korean-born artist Lee Ufan.  Hirshhorn director Melissa Chiu is shown above talking  with Lee Ufan  in front of his Box Garden, a labyrinthine fountain piece directly under the sky.
The tension between seemingly unrelated materials is deliberate, as was the choice of each individual stone - heavy granite shapes weighing hundreds of pounds. Each boulder was chosen to be part of what he terms a dialogue that is up to the viewer to construct for him or herself.  The simplicity of the designs, which fall under a single title "Relatum," is disarming and is intended to provoke. What could be more  different than the contrast between natural stone and manmade industrial steel, up against the slippery elusive flow of water? A media release states that the show, to continue into September 2020, is the artist's largest 'site-specific outdoor sculpture project in the U.S., the first exhibit of his work in Washington, and the first time in the museum's 45--year history that an artist has been invited to take over the entire plaza space.
Posted by Urbanities at 11:42 AM