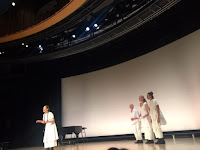 WHEN A PICTURE DOESN'T DO JUSTICE
The tiny woman standing up front in this tiny photo contains a very large store of energy and emotion, and she does most of it through sound coupled with minimal gestures. Meredith Monk is an innovator in the arts world, active since the 1960s, performing what she sometimes calls 'sound sculptures' and what erudite admirers call "extended vocal technique" coupled with "interdisciplinary performance." The sounds she and her small five-woman troupe make cannot be totally divorced from their motions, minimal as they are. The body is an instrument as much as the voice. The resulting original work  is very nearly indescribable since it is the compilation of so many sensations in what appears to be sacred space for an experience akin to churchgoing.
Not coincidentally, the Hirshhorn Museum  chose to present Monk and her vocal ensemble in a space often interpreted as sacred to Native Americans -  Smithsonian's National Museum of the American Indian. It was a one time event, called "Cellular Songs: Concert Version." Solemn for the most part,  the mood was broken during an encore when the 'chieftain' of the tribe - the formidable 80-some yearly Ms. Monk - broke into a rollicking imitation of an elderly woman happily, joyfully, telling a story. The Hirshhorn  institution has been breaking ground in many ways of late. This time the program was under the direction of the curator of media and performance along with Monk's own House Foundation for the Arts. All the arts. She uses incorporates film as well as visual design.
Curious how merriment can be felt even when performers' tones are solemn, almost dirge-like. Their actions resonate with joy, empathy, compassion. Especially when all are huddled together (yes like a football team) at the end.
Posted by Urbanities at 2:19 PM