Gung Ho to the Galapagos


The New York Times' travel section on Sunday Feb. 10  mixed editorial opinion along with a single writer's impressions of the fragile semi-protected world of the Galapagos - those wildly diverse idyllic islands some 600 miles off Ecuador's western shore. The writer implies that a crisis is brewing there - dangers to the habitat brought on by careless tourists and overseers, though who really is at fault is difficult to determine without more thorough analysis.
I visited for a week in mid-January with a small group of eight on a catamaran that carried a lively crew of six or more, in addition to an expertly trained guide who displayed our daily schedule on a bulletin board much like would happen at any well organized training facility. This was vacation but it was more pointedly education with side indulgences like swimming and kayaking. Weather seldom interrupted the plan. As an example of much-ballyhooed luxury ecotourism, the time spent could not have been better overall.
We even have a chef talented and humorous enough to carve for each dinner buffet table the replica of a familiar icon (Mickey Mouse) or aquatic animal out of fruit and vegetables.
But when a friend inquired casually what were the strongest impressions I had of Ecuador - the group had on the previous week been transported by canoe to an indigenous-run resort located in the Amazon river basin - I had to confess most of the recurrent images in my memory were of that expedition. Maybe because signs were evident in Galapagos of the country's strong effort to preserve the islands character by limiting visitor numbers to some extent - charging $100 each - and restricting carefully the movements of boats (and ships) to anchorages. 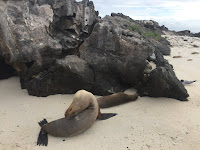 Momma and her baby sea lion on the beach. Offspring can nurse 10 years or more.

In each place we were incontrovertibly 'far away from civilization,' enjoying the comforts of home while exposed to the most 'exotic' of primitive sites. Somehow, traveling upstream in a motorized gondola on one of the Amazon''s largest tributaries, we also were exposed to the pernicious invasion of industry and made to see inroads of commerce - oil extraction basically - on the shoreline. The ever increasing danger that indigenous culture will be wiped out - those that don't 'conform' to civilization's greed.
Galapagos is symbol of a wilderness contained - so far. Our adventure inland was a reminder of the conflict ahead for a country - the smallest democracy in South America.
Posted by Urbanities at 2:08 PM