Nothing edible but plenty lovable this proud citizen of southwestern Pennsylvania's comeback city.
So proud that if  a visitor dares say jokingly he's 'in the pitts,' he might get hit with a rebar. Metaphorically, that is. Steel made the place, remember. NFL Steelers seem to own it, so plentiful and prolific the black and yellow brand. Yellow is the color of one of the more prominent bridges that pop up everywhere. Hundreds of them.Twelve so-called downtown bridges alone. Nothing to sneer at when coursing up down and across three rivers (Ohio, Allegheny, Monongahela) and  the innumerable hills and valleys that dominate the terrain
"People don't leave Pittsburgh." (I.e. We're loyal. We don't often move.)
"People here pretty much take care of themselves." (On why there is no public transportation to and from the city's 'international' airport an hour from downtown.)
A 60-hour visit reveals much to love in this quirky city full of colorful  local neighborhoods.  Pie For Breakfast  ( vinegar pie, custard based, a tribute to the Depression era when fancier versions weren't available) is a perfectly plausible name for an eatery as is the existence of a distillery (bourbon, gin, what have you) called Wigle. The riverfront area  known as the Strip has ethnic options  galore: Italian coffee and pastry; Polish sausages made on site.  The 'ultimate' P-burgh  food offering is a sandwich from Primanti Brothers -a layered  mix of meat, fries and coleslaw, just right for people on the go.
"Pittsburgh Is Everyone," a t-shirt boasts.
A  city of some 300,000 people - an amazingly low number relative to its offerings - seemingly lacks nothing.(Especially not rain.) First rate educational and cultural institutions.  Famous, often infamous,  citizens of renown.  Andrew Carnegie, Henry Clay Frick, Andy Warhol, Billy Eckstine,  the Heinz family,  to name a few. Some left to live elsewhere but came back home to be buried.
An advertisers pamphlet called the Urbanist bills itself as "Authentic Pittsburgh." Tough word to live up to. I'd point to  'Lincoln's P&G Diner' in Millvale - cash, no cards (no advert in the Urbanist either) - also known as 'Pamela's.' Featured photo displays of beloved neighbors, past and present.  Hot cakes  that are thin-like crepes so good the Obamas brought the owners to cook a meal for them in the White House. 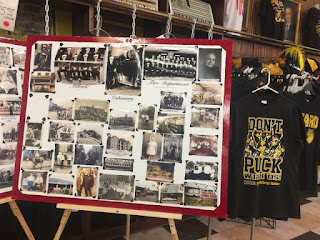 All this from a grim history of industrial warfare and pollution before environmental controls came along: foul air, treacherous working conditions, labor strikes. A capitalist roller coaster writ large.
The borough of Braddock, a suburban backwater on the 'Mon,' is an example of ongoing change over time. Braddock's population of nearly 21,000 in 1920  is down to some 2,000 today - 900 of them employees of the U.S. Steel Corporation mill that  throbs day and night with a low-key hum, its giant electrical grid resembling a sonic fairyland on some faraway moon. Progress and dissolution and now, slowly, fresh hope. The plant's predecessor, built by Andrew Carnegie way back in 1873, was one of the first mills to use the Bessemer process that refined cost and quality of  steel production. Braddock was home to the first of Carnegie's public libraries; it included a tunnel entrance for millworkers that lead to a bathhouse in the basement. The site also had a swimming pool, billiards tables, indoor basketball court, and music hall. The building was rescued from near-death  in the late 1970s and remains in operation (without the recreational facilities).
Braddock's  burly mayor, John Fetterman, became something of a national TV star based on his good works and ambition. He was recently elected  the state's  Lt. Governor after a long career in the nonprofit sector spent helping the local community. He keeps house across from the plant and next door to the trendy Superior Motors restaurant that he created out of the premises of a  former Chevrolet dealership.
He's a Pittsburgher, what else.

Posted by Urbanities at 7:51 AM