What to make of a place that dubs itself in promotional literature a 'magic city'? Is such a boast hiding a worry that ordinary accolades don't measure up?


I read from local promotion material how Billings was named for Vermont native Frederick Billings, who made a fortune as an attorney and real estate developer during the California gold rush. Billings used some of that fortune to invest in the Northern Pacific Railroad, and acted as the company president for a few years. It was during that period that the railroad was stretched across Montana. A new town was created between the Yellowstone River and the rimrocks to the north. The town, which soon overtook nearby Coulson, was named Billings to honor the railroad president. Frederick Billings never lived in the town, though he donated large amounts of money to support it. His eldest son, Parmly Billings, was the only member of the family to live here.

So the man who gave his name to the city (or is it town - with only 110,000 people?) never lived there. The magic was his money. The way was paved with gold, and the good fortune of the historic river along which Lewis and Clark tree on their very meaningful way west.  There's a perverse admiration for the built-in respect for commerce as the boon to life. A major boulevard - to give the street the grandest possible distinctive name - called Grand is lined with casinos, or seems that way so numerous are the signs. The lure of the deal, the mirage of riches. Dark rooms and plenty of neon.

Downtown: A fledgling independent cinema showing feature films; an outdated theater with touring shows and occasional performances by a local symphony. An excellent secondhand book store. A respectable art museum. A modern looking library.  But mostly  large scale truck and auto and horse or bull riding in a stadium arena east of town as well as the annual fair. In  the western end an extravagant sporting goods store featuring a Ferris wheel, an aquarium and a taxidermy exhibit of animals great and small, not to mention an extensive selection of firearms and ammunition for sale.(The miniature bowling alley especially popular with families on an outing when  snow moves in.) No happy-go-lucky electric scooters on downtown streets and sidewalks - not yet. No rental bikes. Intercity buses exist but have only limited schedules. A Frenchman married to a Billings native has started an authentic (i.e. he does all the work himself using starter dough he brought with him from Singapore, of all places ) bakery that produces  real baguettes on a daily basis.

Proof at left of the kind of enterprising spirit that is alive in offbeat areas (i.e. neglected, or otherwise underutilized and abandoned): a former grocery on Minnesota Ave. 'south of the railroad tracks ' - yes, literally, with all that implies - where low income housing prevails.  The wall sign proclaims Kirks Grocery, now reconstituted as an art gallery space recently taken over by musician/artist Shane deLeon. The early 1900s red brick building operated by two brothers, one of them named Richard Kirk, between 1907 and 1936. In addition to offering contemporary art, the owner - a Billings' native who only recently returned home to promote art and music events in a brand new space.  DeLeon's faith and optimism is contagious. Think lower East Side New York or London's Shoreditch before developers moved in - and similar infusions of fresh energy in smaller cities elsewhere (I.e. Lancaster, Pa.,,arch conservative by reputation now touted as 'the new Brooklyn').  It's a quirky town, the kind that inspires ambivalent loyalty but seldom outright bragging and statement of magnificence that Missoula and Bozeman produce from  visitors and denizens alike. Why, then, did Outside magazine in 2016 call Billings a  "Best Town" ?  Doubtless two well established rival medical clinics (one with a connection to Mayo) helps in the counting but they weren't mentioned. The focus was on outdoor living and affordability, pointing out comparisons with "already discovered Montana adventure hubs like Missoula and Bozeman" - on the fact the town is, quoting one resident, is 'in a renaissance stage."  Yes, the river is impressive, and so is the town's natural setting nestled beneath a 300-foot high sandstone rim called the High Line (as far from the New York site of the same name as you can get) bordering in uneven formation across nearly the entire northern boundary.  Seen here from a car window...the looming barrier under the fabled big sky, like a wave about to topple onto the inhabitants below. 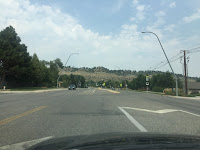 Contrasts are constant, both in views and weather. And conflicts are common in territory built in myth upon man's rights as opposed to those the government sometimes claims. Witness the sign posted this summer by a downtown coffee shop owner objecting to a published report of an altercation that had taken place on the premises. 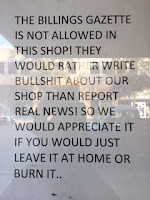 Posted by Urbanities at 8:46 AM