Get a whiff of this: the Corpse Flower  (yes, that's the name) exploding in all its glory for the first time in several years at Washington's U.S. Botanic Garden (an arm of Congress, dedicated to the natural as opposed to the political life). Unusual, too: Three Corpse flowers taking their own sweet slow time before these plants, native to Sumatra, unfold green and violet winglike outer covering (a spathe) to show the world just who is boss.
Note: The botanical specimen is really hundreds of little flowers making up what the professionals call its 'inflorescence.' Along with the explosion of color comes an intimidating scent that is compared to rotting meat.
Ah, go ahead, give it a try. It's free. So is the joke that, well, something 'smells' in the capital city.  Be it ever thus.
One difficulty is the plant's ornery nature: it makes up its own mind when to perform and it does so without much of a warning.
Reputably as many as 20,000 people came by the building in a single day one year to gaze  at(and whiff)  the eruption.
Explanation: The huge size of the bloom (think man size and even higher) needs years - decades even - to store up enough energy to show its stuff.
Think lily with a giant ego, in human terms. The smell  is what attracts pollinators, such as carrion beetles and flies.
This humid greenhouse  can trace its origins back to an idea by George Washington - though an actual building didn't exist until 1850 when it  gained stature as the first such structure to be made of aluminum instead of steel. Where history is concerned, humble yourself before the cycads  - much smaller plants at the base of the corpse and much older. These particular ones date back to 1842, so said outgoing director Ari Novy - who has spent five years overseeing the 7000 species of plants found in this public place. 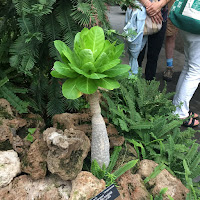 (Including this much smaller  one, the scintillating green Cabbage on a Stick,, a rare species from Hawaii, marvelous to behold among the many towering wonders within the glass framed conservatory - all free for the looking.)

Posted by Urbanities at 2:31 PM