Be of good cheer (in spite of all)

In this November 2016 season of our discontent (politically anyway), a little humor is advised. Any possible distraction. Follow the words of the song that begins "Smile though your heart is breaking."
Too soon for endless tears but the habit of cheer is worth adopting. Take advantage of escapist living.
Recall - some people really will - when a lighthearted soul named Harvey Wallbanger got 7 % write-in votes for President in 1972 (Nixon-Magovern). At the time HW was the name of a fashionable drink promoted by the distributors of the Italian liqueur Galliano, a golden syrupy sweet potion layered atop orange juice and vodka. I know a sporting fellow who says he banged down snowy mountains in Colorado with no pain after many Wallbangers and even lived to tell.  It may speak to the good humor or crazy ways of the American public that so many voted for a man named after an alcoholic drink instead of a man. Whoever he is, the Web says he is back in the 2016 race, however belatedly. And the drink may be coming back in favor again if distributors have anything to say about it. The push was on recently in Washington DC's Union Market. A blitz of "Elect Harvey Wallbanger" buttons and the sale of several  concoctions using the liqueur in novel ways were on tap  all afternoon. 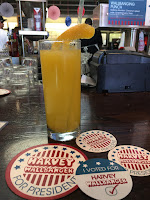 Posted by Urbanities at 6:27 AM