I went to Oman the other day and didn't even need a suitcase. Such is life in an international city.
I'm not fussy. I'll go just about anywhere if there is a promise of learning something new or seeing something old in a new way.  Going to the opening of the new Sultan Qaboos Cultural Center at the corner of L and 16th Streets in Washington's Northwest was a no-brainer. No ticket needed (free admission) and certainly no luggage since this was local and certainly novel. I actually was in Oman (the Sultan's home and, you might say, his kingdom). The newly renovated building - once belonging to Arts for the Aging as well as Planned Parenthood - is officially that country's territory, albeit far  removed from its striking location on the southeastern tip of the Arabian Peninsula.
These days, there could be no more vital spot in the Middle East with Yemen and Saudi Arabia for neighbors and Pakistan and Iran not far away. But politics played no part in a program devoted to historic and cultural matters designed to impress visitors circulating throughout ts pure white walled rooms. Women lined up all evening to get a jeweled henna design on their hands and arms (and learned that lemon juice helps preserve the pattern).  An instrumental trio played 'typical' background music to accompany typical Middle Eastern hors d'oeuvres. (Nothing like an oud to set a mood.) The Lebanese Taverna catered; an Iranian-born calligrapher translated signatures - first name only - into Arabic script. (Mine  resembled either a ghost in flight or a gourd with a stick. So much for easy translations.) It was almost worth negotiating the day's deluge of rain that felt like more than Oman might get in a year to inspect the model showing the country's water filtration system. Take a look, Los Angeles.
Take me back anytime. There's actually some lush green space out there in the desert kingdom. Plus real frankincense that you can both drink and burn. It cures nearly all your afflictions, or so the sample handouts said. 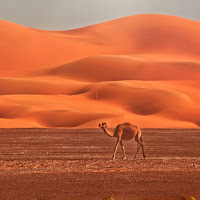