METRO NOTES
Passengers stand out as characters on a stage because the platforms are so dark for anyone or anything to be recognized except on the interior of cars. What's with the obscure lighting of stations? 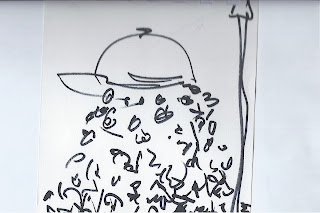 Of men and hair: from the back of one with braids tight to the head and flowing down the neck, I could not tell the gender. (From the large leather jacket I guessed a man.) Across the aisle a man with copper-colored sneakers and a head full of rasta braids in full flower. 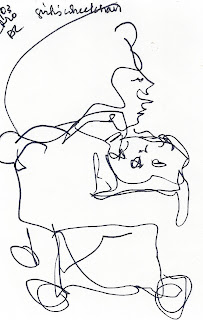 Sights to behold: The immaculately made-up woman in the wheelchair, stylish throughout, with an artificial leg swinging from rear handle of her motorized wheelchair  complete with high heel shoe. And the very self-absorbed woman who spent at least three station stops brushing with a dark pencil, over and over  on a single brow to form a perfect arc. Not to mention the abundance of intriguing and inventive hair styles on African-American women.

Ok, ok, I know this is redundant even patronizing talk, and Chris Rock did the subject a queasy favor with his "Good Hair" film. When the irony is how self-mutilating much of the 'creative' styles can be; the insane use of harmful chemicals to promote - freedom?  Ironic, too, how much of the money in the hair trade stays out of the country. Isn't there a pushback of sorts? Yes and no. It seems to be too profitable for too many people, and attitudes change too slowly. Rock wimped a bit at the end, showing off his kids and saying that what is important about their heads is what is inside... yah,ok.

And what is the sense of this nonsense, on a poster far up on a Dupont Station wall: "When you believe more, you sleep less."A Verizon post, I found hidden among squiggles in the background. This line was followed by the words "Powerful Answers." Oblique intrigue. The person who spends her time trying to parse the sentence will undoubtedly lose sleep.

'Time keeps on slippin'' is the refrain that the lavishly overpaid Metro establishment uses to excuse its inexorably bad performance regarding upgrades on the system. So the poster promising that Dupont Circle's repairs would be completed by July 11/11 has a black notice attached in the corner of the original saying that April 12 is now the estimated completion date. 'Better Hurry up' was written underneath the slogan, presumably by one of DC's frustrated commuters. A polite request, under the circumstances. Graffiti is the only defense method a rider has...
There is some value to the Metro platforms besides their use as holding pens  - perfect performing venues.
Perhaps  overpaid system managers could hire musicians to entertain between long waits and delays, especially on weekends. One distraction available has been a group at Metro Center turning up ad hoc with their doo-wop a cappella songs providing much-needed charm and cheer. The be-hatted men with rhythm belt out harmonies so smoothly syncopated  they might as well be under stage lights instead of the lusterless bulbs of our once reputable public transportation system.

Posted by Urbanities at 9:06 AM